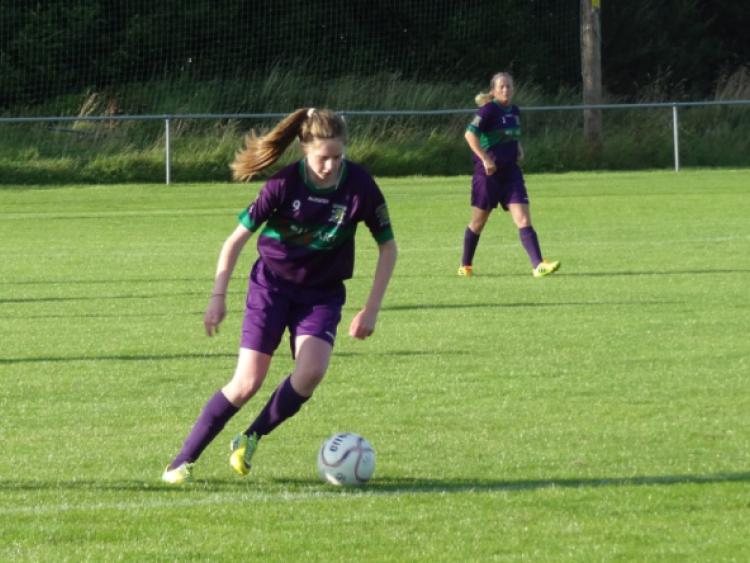 Portlaoise Ladies battled through to reach the final of the KDFL Shield following a win over local rivals Mountmellick Utd after what was a tough semi-final clash for both teams.

Portlaoise Ladies battled through to reach the final of the KDFL Shield following a win over local rivals Mountmellick Utd after what was a tough semi-final clash for both teams.

From the outset Mountmellick looked the brighter side as the sun shone down on Conor Davis Park. Portlaoise, who have recently been crowned league champions, were slow to start and Mountmellick took full advantage with a goal in the opening 10 minutes from Susan Lee.

The first goal seemed to spur Mountmellick on and a second goal was soon to come when Lee scored once again putting the home side up 2-0 just 25 minutes into the game.

The second goal seemed to get a reaction from the Portlaoise side and they proceeded to dominate the remainder of the half with persistent attacks on the Mountmellick goal. This paid off when, just on the stroke of half-time, Becka Kelly scored for Portlaoise following a cross in from Grainne Moran on the left wing, making it 2-1.

On the resumption, Portlaoise came out with all guns blazing, determined to level the score. Portlaoise started to settle and pass the ball well with some delightful play, however, it was the introduction of Colleen Rickard that seemed to lift her team mates in the second half. Ten minutes following her introduction, she scored a fine goal dancing through the Mountmellick defence and finishing from the edge of the box with an outstanding strike to level the game at 2-2.

Following this, the intensity of the game grew as Portlaoise piled on the pressure with some great combination work in midfield between Jenny Conroy and Danielle Keane which proved vital in the latter stages. The Portlaoise back four also played their part with some great runs out of defence by Aisling Kehoe and Ciara Dunphy.

With four minutes left in normal time, Portlaoise were awarded a penalty following some fancy footwork by Mo Nerney who was brought down in the box by ‘keeper Carrie Connell. Mo stood up to take the penalty and finished in fantastic style making it 3-2 for Portlaoise with three minutes remaining.

Portlaoise held onto their lead until the final whistle. Portlaoise ladies will now face Castle Villa in the final of the Shield with date to be decided.