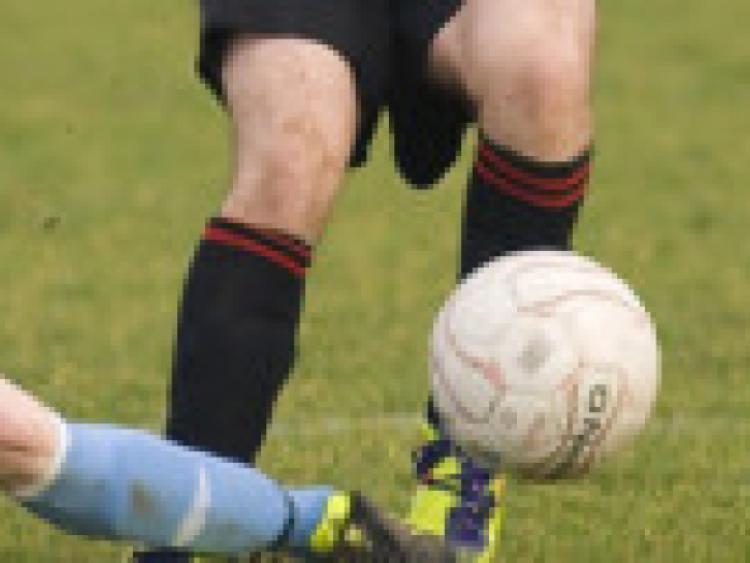 The MSL 2014/15 League kicked off last Saturday in Conor Davis Park with this local derby in the U-16 East Division with Portlaoise edging past neighbours Mountmellick.

The MSL 2014/15 League kicked off last Saturday in Conor Davis Park with this local derby in the U-16 East Division with Portlaoise edging past neighbours Mountmellick.

Portlaoise started in great form and in the first 15 minutes created three clear cut chances but Craig Reddin shot wide on five minutes,Ross Brennan was then just wide on 10 minutes and Ronan McEvoy shot over the bar on 15 minutes.

Mountmellick then got to the pace of the game and they created two good chances and Toby Achenbora and then Conor Comiskey went close on each occasion. On 25 minutes Craig Reddin was fouled in the box but the Mountmellick ‘keeper made a brilliant double save to deny Charlie O Brien from the spot.

Then, just before the break, Toby Achenbora broke clear but Sean McCormack made a brilliant save to leave it 0-0 a half-time.

Mountmellick started the second-half in good style and had two chances in the first 10 minutes but Sean McCormack denied Toby Achenbora and Brian Sheehy cleared a goal bound shot off the line. Portlaoise then went ahead on 50 minutes when a brilliant pass from Colum Dunne sent Joe Nevin through on goal and he finished in style to make it 1-0.

On 55 minutes Mountmellick made it 1-1 when Toby Achenbora ran through the Portlaoise defense and finished in style. Portlaoise regained the lead on 58 minutes when Ronan McEvoy set up Aaron Wright who then was hauled to the ground.Wright made it 2-1 from the spot-kick. On 65 minutes Toby Achenbora scored his second to make it 2-2. Ronan McEvoy then scored for Portlaoise on 75 minutes when he chipped the keeper and the ball ended in them top corner after a brilliant pass from Ross Brennan set him up.

Portlaoise then lost Jason Maher on 78 minutes who was carried off with an ankle injury and let’s hope he will be back in action soon. Mountmellick nearly scored at the death but a point blank save from Sean McCormack denied Mountmellick the equaliser and it finished 3-2 to Portlaoise after a titanic battle.

Mountmellick were best served by Daragh Travis, Philip Hibbits, Conor Comiskey, Cian Horan, James Hickey and Toby Achenbora who is a young player with a bright future in the game.