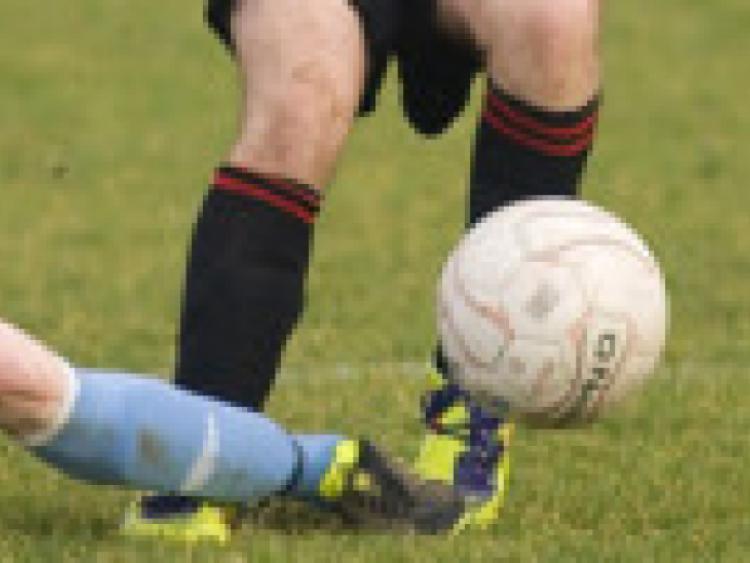 With the pressure mounting on teams as they chase promotion or battle relegation, we look ahead to some of this week’s games involving Laois teams in the CCFL

With the pressure mounting on teams as they chase promotion or battle relegation, we look ahead to some of this week’s games involving Laois teams in the CCFL

While their game fell foul of the weather last weekend, Mountmellick chances of avoiding relegation from the Senior Division still took a blow as Arlington pulled off an incredible result beating league leaders Mullingar Athletic 3-2.

That means that one of the sides Mountmellick would have been targeting to catch has made a major move towards safety making their task all that more difficult with four games to game. Mountmellick’s problem is that while they are level on points with St Peter’s and are just a point behind Melville and four off Killavilla, they have played more games than each of the trio in front of them.

All that ads up to this Saturday’s clash with Killavilla being crucial if they are to drag themselves away from the foot of the table. It might not be a must win situation just yet for Mountmellick but it is getting very close to cannot afford to lose.

Arlington meanwhile will be hoping to build on their win over the leaders last weekend when they travel to play fourth placed Monksland. When you consider that Arlington have beaten both Mullingar Athletic and Willow Park this year, it shows that on their day they are capable of beating anyone. They have just three games left in the league and are not yet safe so they will be hoping to add another Westmeath scalp to their already impressive collection this Sunday.

Abbeyleix are the only Laois team in action the Premier Division this weekend when they face Birr Town in Fr Breen Park. The sides met in the league in late November and a penalty save in injury-time from goalkeeper Chris Doyle secured all three points for the Laois side on the day. Abbeyleix are very much in the promotion hunt but so are Birr who have three games in hand on their opponents while only being three points adrift. If they are to keep their promotion hopes alive, Abbeyleix simply cannot lose this game. They are already three points adrift of second place and a loss on Sunday would see them get swallowed up by the chasing pack. The sides were evenly matched in November so don’t expect there to be more than the odd goal in this game.

Four Laois teams, Ballybrittas, Portlaoise Shamrocks, Portlaoise and Raheen are hoping to advance to the fourth round of the CCFL’s premier cup this Sunday.

Ballybrittas currently are top of Division 3A and they have home advantage against Division 3 Saturday side Newtown. Newtown are joint top of their division so this promises to be a close game but with home advantage, Ballybrittas would be hopeful of making it through.

Portlaoise host their Division 3A rivals Clonminch Rovers this Sunday. Just three points separate the sides in the league and as in the first game mentioned, it should be close but again home advantage could prove to be the key.

In an all Laois tie, Division 4A side Portlaoise Shamrocks host Division 3A side Raheen. Both sides are in the lower reaches of their respective divisions so the cup will be a welcome diversion for the weekly grind of the league. It can be very difficult to gauge the difference in levels between the divisions but you woould expect Raheen to be the stronger side. However as was shown last weekend in the FA Cup, form can very easily go out the window and it would not be a surprise if Shamrocks could pull off a win at home