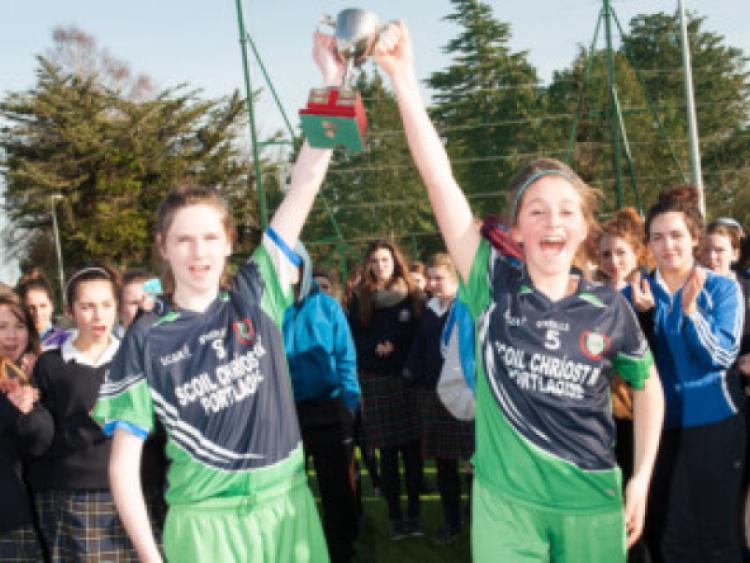 After normal time and 20 minutes of injury-time failed to separate these two talented and evenly matched sides, it was Portlaoise side Scoil Chríost Rí who eventually prevailed after the drama of a penalty shoot-out.

After normal time and 20 minutes of injury-time failed to separate these two talented and evenly matched sides, it was Portlaoise side Scoil Chríost Rí who eventually prevailed after the drama of a penalty shoot-out.

Played on the immaculate artifical surface in Carlow IT, Portlaoise goalkeeper Aimee Keane was the hero as she saved two of the Kilkenny’s side’s penalties while Emma Lawlor, Chloe Langford and Zoe Keegan all found the back of the net from 12 yards as Scoil Chríost Rí claimed the Leinster title.

Presentation’s Ciara Delaney, who was one of the best players on the field over the course of the game, was the unlucky player who saw her penalty go over the bar to spark scenes of great celebration for Scoil Chríost Rí’s players and supporters.

There was little to chose between the sides over the course of the game although Scoil Chríost Rí dominated extra-time and should have won the game before penalties were needed.

They made the dream start to the game when they broke the deadlock after just three minutes when outstanding left-back Jen O’Neill ran from her own half, cutting through the Presentation defence before slotting the ball into the bottom corner of the net.

Four minutes later they should have doubled their lead but Emma Lawlor was unlucky to see her effort come back off the crossbar. Gillian Keenan put the rebound just over the bar. On the quarter hour mark, Presentation had two great chances to level the game but on each occasion they were denied by Aimee Keane who made a fine double save while obviously playing through an injury.

However midway through the half, the keeper had no chance when Shauna Valentine curled a superb free-kick right into the top corner of the net.

Parity only lasted for a matter of minutes as Scoil Chríost Rí quickly got back in front. Again it was an excellent solo effort down the left wing with Erone Fitzpatrick this time cutting through the defence before applying a classy finish.

Both sides had half chances before the break but both keepers dealt comfortably with the efforts leaving Scoil Chríost Rí 2-1 ahead at the break.

The Portlaoise side came out strongly after the restart looking to put the game away and they looked to have gone 3-1 up soon after but Emma Lawlor’s goal was chalked off due to a handball in the build up.

Presentation began to build pressure as the half went on and they drew level when another stunning free kick from Shauna Valentine eluded Aimee Keane and found its way to the back of the net.

That set up a grandstand finish with both defences being stretched to the limit but both back lines held firm up to the closing seconds when Scoil Chríost Rí were handed a late chance to seal the win.

After a well worked corner routine straight from the training ground, a cross from Maeve Phelan was handled by Eadaoin Murphy and the referee had no hesitation in pointing to the spot. Captain Colleen Rickard stepped up to take the kick but her shot down the middle was saved by Amy Adams.

That brought the game to extra-time which Scoil Chríost Rí dominated creating a host of opportunities. Emma Lawlor shot just wide, a shot from Collen Rickard was saved while a shot from Gillian Keenan after a storming run was deflected just wide of the post.

They continued to push in the final ten minutes and Erone Fitzpatrick and Colleen Rickard both came close to sealing the win however they almost lost it at the death but Aobha O’Gorman shot wide with Aimee Keane quickly off her line to apply the pressure.

That brought the game to penalties and Emma Lawlor gave her side the perfect start when she drilled her penalty into the roof of the net. Aimee Keane saved Presentation’s first penalty but Colleen Rickard could not capitalise as her penalty down the middle was saved. Scoil Chríost Rí kept their lead however when Aimee Keane saved a second penalty.

Gillian Keenan was next up for the Portlaoise school but her powerful effort went over the bar and Presentation made it 1-1 in the shoot out when Hannah Scott placed the ball into the bottom corner.

Chole Langford was up next for Scoil Chríost Rí and she was ice cold under intense pressure as she slotted the ball into the bottom corner. Aobha O’Gorman replied in kind for Presentation but Chríost Rí went back in front when Maeve Phelan hammered her spot kick into the top corner.

That left the Portlaoise school 3-2 up with their five kicks taken and when Presentation’s last penalty was put over the bar, it sparked the celebrations as the Scoil Chríost Rí players sprinted to celebrate with their goalkeeper.