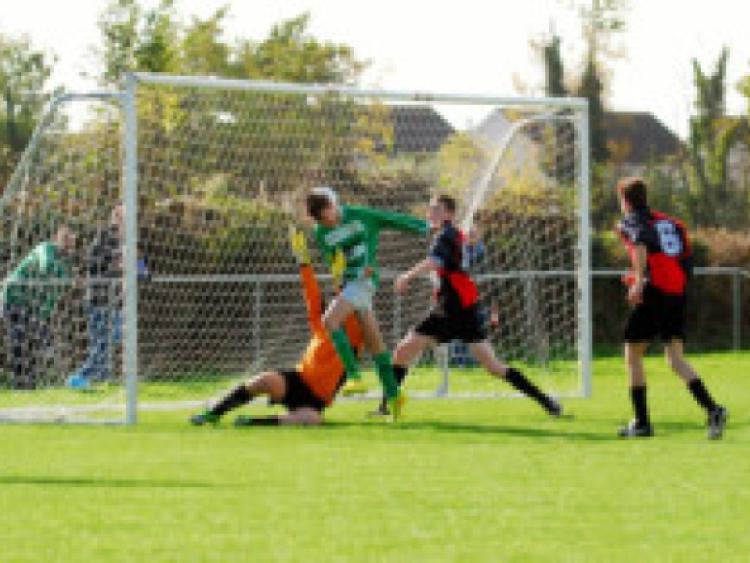 Portlaoise are into the 3rd round of the SFAI National Cup with this impressive victory over a very talented Edenderry team in Rossleighan Park.

Portlaoise are into the 3rd round of the SFAI National Cup with this impressive victory over a very talented Edenderry team in Rossleighan Park.

Soccer U-16 SFAI National Cup Round 2

Edenderry started the brighter and in the first 15 minutes created three great chances but some good goalkeeping by Sean McCormack and poor finishing by the Edenderry forwards left it scoreless in this period.

Portlaoise then created two good chances when good play by Colum Dunne and Aaron Wright saw Jack Langton shoot just over and then Joe Nevin went close when he shot narrowly wide after being set up by Ruairi Lewis.

On 25 minutes, Edenderry went ahead when a good passing move saw them score to make it 1-0. Fionn Scully then went close on 35 minutes but shot just over and it renaoned 1-0 to Edenderry at the break. Edenderry then went 2-0 ahead after 45 minutes when their centre forward headed home a brilliant goal after a pinpoint cross from the a free kick from the right.

At this stage Edenderry looked to be in control of the match but Portlaoise introduced James Keyes and Padraig Kirwan and suddenly began to gain control in midfield.

With 55 minutes on the clock, a great move in midfield by James Keyes and Colum Dunne sent Charlie O Brien in on goals and he finished in style to make it 2-1. Portlaoise then went close on two occasions when Brian Sheehy and Jack Langton went close before Fionn Scully scored the goal of the match when, with brilliant control, he beat two defenders before firing a unstoppable shot into the top corner from 20 meters to make it 2-2 on 70 minutes.

The referee blew the final whistle on 80 minutes and the game went into extra time where there would be two periods of 10 minutes and then penalties if required. Edenderry then went ahead five minutes into the second period of extra time when they scored from the penalty spot after their centre forward was tripped in the box and made the score 3-2.

Portlaoise replied straight away when Aaron Wright raced down the left wing and cut inside and fired a brilliant shot high into the net to make it 3-3 with three minutes remaining in the match and it looked like it was heading for the dreaded penalty shoot out.

However in the last minute of the game Aaron Wright again ran at the Edenderry defence and, after beating two defenders, was taken down in the box. Up stepped Fionn Scully to slot home the penalty and to make the score 4-3 to Portlaoise.

Seconds later the final whistle sounded and Portlaoise celebrated in style and are now into the 3rd Round when they play Birr Town in Rossleighan Park with a date to be confirmed later. Their next match is against Rosenallis next Saturday in the Grove Rosenallis with k.o 12.45. Best for Portlaoise on the day were Sean McCormack, Charlie O Brien, Padraig Kirwan, Jason Maher, Aaron Wright, Ruairi Lewis, Joe Nevin and man of the match Fionn Scully.