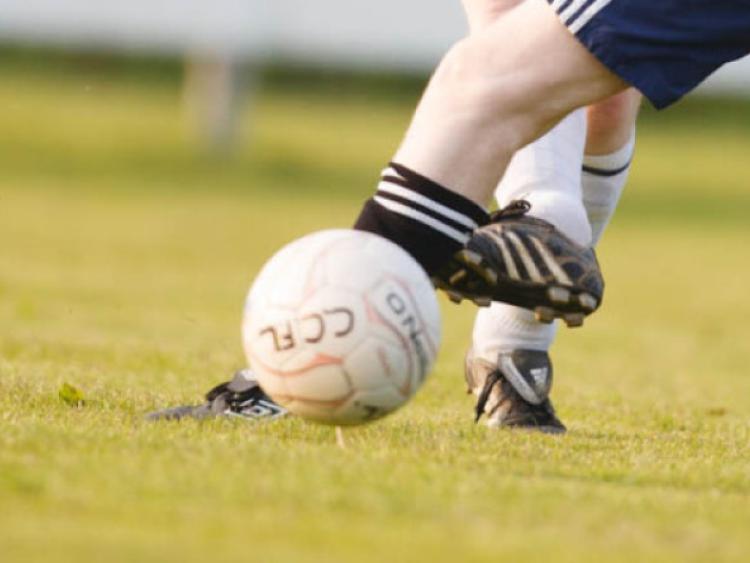 Division 4A high fliers Tower Hill Rovers from Portlaoise exited the Division 4 Cup away to Offaly side St James. In a game where chances were at a premium, the home side scored three times from set pieces with one goal coming direct from a corner kick.

Division 4A high fliers Tower Hill Rovers from Portlaoise exited the Division 4 Cup away to Offaly side St James. In a game where chances were at a premium, the home side scored three times from set pieces with one goal coming direct from a corner kick.

In a game where chances were at a premium, the home side scored three times from set pieces with one goal coming direct from a corner kick.

The Offaly side based between Kilcormac and Birr are close the foot of Division 4B but they have now put together back to back cup wins and will prove tough opposition for whoever they draw in the next round.

The covering of frost on the ground had cleared before the game started leaving the pitch soft in places and making passing and retaining possession difficult for both sides.

A light rain fell throughout the first half which made a cold morning feel even colder but both sides settled quickly to their task and a clear pattern emerged in the game.

Neither side created a clear cut chance over the 90 minutes from open play which is largely due to the efficiency of the defending at both ends of the field. Set pieces however were a very different matter with both sides looking vulnerable but the difference on the day was that St James converted three times from training ground moves while Tower Hill Rovers were unlucky on more than one occasion not to find the back of the net.

In general play the sides were evenly matched and over the 90 minutes the Portlaoise side probably held the upper hand in terms of both territory and possession.

They had plenty of the ball in the opening stages and created the first opening of the game when a long throw was flicked just wide of the post.

With a quarter of an hour on the clock they came very close to taking the lead. A beautifully flighted corner from Sean Cotter was met by a powerful header from the unmarked Sean Egan but he just couldn’t manage to direct his effort on target as it went over the bar.

Five minutes later centre-forward Adrian Kelly thought he was clean through on goals but he was adjudged to have been marginally offside.

After struggling to create chances in the opening half hour, St James finally sprung to life when right back Mark Kennedy’s crisply struck volley was tipped around the post by Brian Harrington. However from the resulting corner, the home side took the lead as Conor Gath’s low ball to the near post was flicked to the back of the net by Wayne O’Brien.

Both sides were looking dangerous from set pieces and Tower Hill Rovers almost equalised two minutes later when a corner from Sean Cotter was glanced goalwards by John Fennell but the home side managed to clear their lines.

The final chance of the half again came from a corner with St James only denied by a fine block by the home defence.

The score remained 1-0 to the break but the visitors came close to levelling matters eight minutes into the second-half. Good pressure from Tower Hill forced the St James’ defence into a mistake but Paddy Downey’s well struck shot was deflected away for a corner.

With the game in the balance and with both sides making changes, the St James’ manager made the brave decision to switch from a 4-5-1 formation to a 4-4-2 in search of the second goal that would put the game away. A lot of managers in that situation would have looked to close up shop but the decision paid dividends as with 15 minutes to go they doubled their lead.

The increased pressure forced a corner and Conor Gath’s inswinger with his left foot from the right side eluded the Tower Hill defence and found its way to the back of the net.

That left Tower Hill with a massive mountain to climb and to their credit they continued to battle to try and at least force extra time.

However as they pushed forward in search of a foothold in the game, they left themselves exposed at the back and St James took advantage as they added a third goal ten minutes from time to remove any lingering doubt over the result.

Again it was a delivery from the right from Conor Gath that caused the problems, this time from a free near the end line. The ball broke in the Tower Hill area and Dermot Gath took advantage toe poking the lose ball over the line.