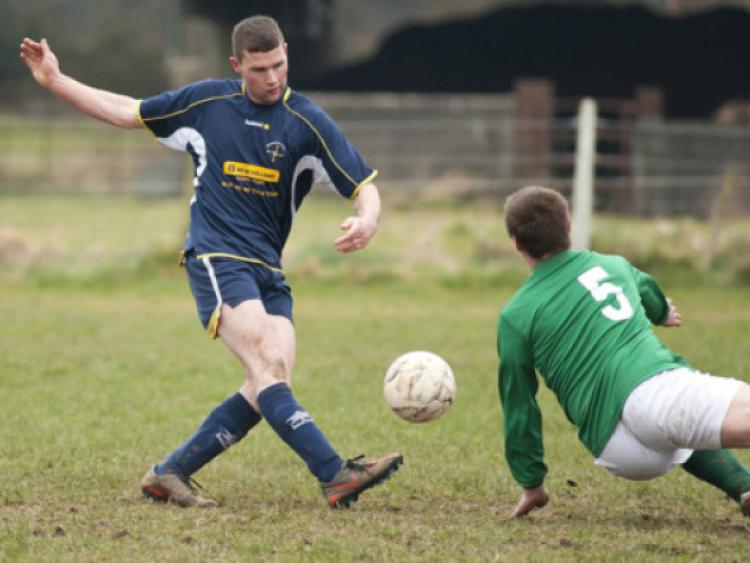 In the Paddy Cotter Cup three of the four quarter finals took place over the weekend with Mullingar Athletic and Arlington getting past Mountmellick and Clara respectively to set up a semi final clash that will be a repeat of last years final.

In the Paddy Cotter Cup three of the four quarter finals took place over the weekend with Mullingar Athletic and Arlington getting past Mountmellick and Clara respectively to set up a semi final clash that will be a repeat of last years final.

Goal scorers for Arlington were Daryl Foy (2) and Brian Mahony and they could afford the luxury of a missed penalty in the second half as the Clara challenge died away.

Rosenallis also made it into the last four courtesy of a good 4-0 home win over Derry Rovers. Two more goals from the prolific James Jackson and further strikes from John McLoughlin and Conor Dowling saw them through. They await the winner of Willow Park and Stradbally Town in the semi final.

In the Combined Counties Shield a brave effort from Ericssons fell just short against a very strong Clara Town side who made it through to their second semi final of the season as they try again this year to win all before them.

In the Division 4 Cup Quarter Finals St James and Abbeyleix Athletic had good wins over St Aengus and Monksland to set up a semi final against each other in a couple of weeks time.

In League action there was one very important game in the Under 19 Division where Tullamore emerged 3-1 winners over Clongowes Wood. Following a scoreless first half, the game sprang into life in the second period when Dylan Melia fired home a penalty kick. Clongowes equalised however with less than 10 minutes remaining, but a determined finish from the Tullamore lads with fine goals from Ted Conway and Matty Hynes in the closing minutes earned them the vital three points.

In the Senior Division, St Peter’s continue to climb the table following a good 3-1 win away to Monksland. Melville gave their survival chances a lift with a deserved 3-0 home win over Killavilla.

It’s now advantage Tullamore in the battle for Division 1 supremacy. They defeated Highfield United 2-0 in Birr to move into the lead on their own, but with vital away games against Shinrone and Temple Villa still to come it is still wide open. Clonbonny reminded everyone that they are certainly not out of it yet either following a narrow one nil success at home to Gracefield Athletic.

In Division 3A Raheen got over their recent Cup disappointments as they were too good for Kilcormac at home where it finished 4-2 in favour of the hosts. Dan Dalton added yet another two goals to his tally for the season with veteran Eddie Dunne and John Shiel getting the others as the Laois men look to climb the table.