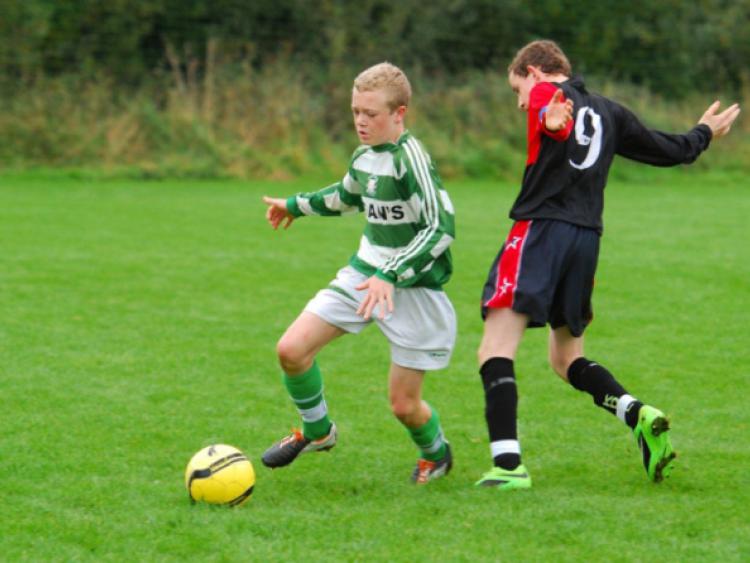 This was a fabulous soccer match played before a large crowd with football of the highest quality played by both teams.

Portlaoise went close on 10 minutes when after a brilliant run by Jack Langton on the right his cross was headed just wide by Brian Sheehy. On 15 minutes Jack Langton had a great effort saved by the Edenderry keeper and from the rebound Joe Nevin shot wide.

On 25 minutes Edenderry went close from a free kick but Sean McCormack pulled off a great save and then on 28 minutes he pulled off another fine save to deny the Edenderry striker.

Portlaoise finally took the lead on 35 minutes when, after a handball in the box, Niall Doran stepped up to fire home to leave the score 1-0 at half-time.

Edenderry came out in the second half and dominated the first 15 minutes and scored on 18 minutes when their centre-forward shot home from 10 metres to make it 1-1.On 20 minutes they nearly went ahead but shot wide from a free kick on the edge of the box.

The game was looking like going into extra time but a minute into injury time Ruairi Lewis sent in a quality free kick into the box and Brian Sheehy got to the ball before the keeper to head home to give the town victory at the death and leave the final score 3-2 .

Edenderry were a quality team and Portlaoise had to raise their game to win this epic match.Portlaoise were best served by Sean McCormack Jason Maher Niall Doran Brian Sheehy Ronan McEvoy Jack Langton. Fionn Scully and man of the match RuairI Lewis.Portlaoise now play either Arklow Town or Granada F.C at home in the third round in a few weeks time.