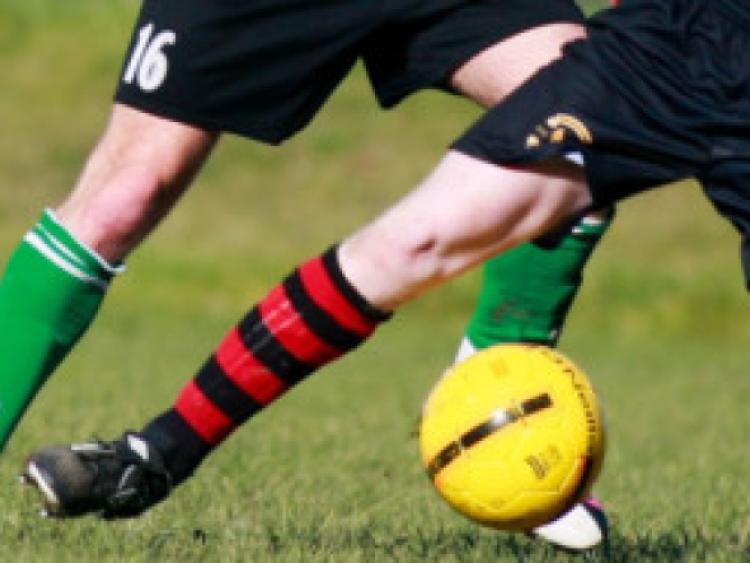 Portlaoise are into the semi-final of the MSL U-15s Cup after this victory over Mountmellick in the Leisure Centre Portlaoise last Saturday afternoon.

Portlaoise are into the semi-final of the MSL U-15s Cup after this victory over Mountmellick in the Leisure Centre Portlaoise last Saturday afternoon.

Portlaoise started well and had two chances early on but Jack Langton and Ronan McEvoy shot wide on both occasions. On 10 minutes Mountmellick midfielder Jack Carroll had a shot well saved by Sean McCormack and Toby Achenbora then had a shot just wide after 15 minutes. With 18 minutes on the clock, Portlaoise went ahead when good work on the left by Aaron Wright and Joe Nevin saw Wright send over a perfect cross for Jack Langton to control and finish in style to make it 1-0.

Mountmellick then lost their star striker Toby Achenboro through injury on 20 minutes. Mountmellick’s ‘keeper Daragh Travis then make a brilliant save to deny Portlaoise midfielder Niall Doran from scoring on 35 minutes.

Portlaoise scored the goal of the game on 38 minutes when a passing move was started in the Portlaoise half by Fionn Scully. It lead to an eight man passing sequence that finished when Ronan McEvoy sent Aaron Wright in on goals to finish in style to make it 2-0.The half time whistle sounded just after this with the score 2-0 to Portlaoise and 4-2 to the Town on aggregate.

Niall Doran nearly scored just after half-time when he hit the crossbar with a brilliant overhead kick. With 45 minutes gone, Portlaoise went 3-0 ahead when Ruari Lewis sent Aaron Wright through on goals and great skill by Wright saw him beat three defenders and then slip the ball past Darragh Travis in the Mountmellick goals. Jack Langton then scored his second on 60 minutes when Ruairi Lewis sent him through on goals and he made it 4-0.

Mountmellick got back in the game when Jack Carroll finished in style on 65 minutes to make it 4-1.On 68 minutes Joe Nevin headed home after great work on the left side by Charlie O Brien and Aaron Wright to make it 5-1.Just on the final whistle Mountmellick made it 5-2 when Jack Carroll sent Conor Comiskey through on goals and he beat Portlaoise keeper Sean McCormack in style to make the final score 5-2 to Portlaoise and 7-4 aggregate to Portlaoise. Portlaoise now meet Tullamore Town in the semi-final. Best for Portlaoise on the day were Sean McCormack, Brian Sheehy, Niall Doran, Joe Nevin, Aaron Wright, Jack Langton and man of the match Jason Maher.

Portlaoise Town play Tullamore Town in the top of the table clash in the MSL Major Division next Saturday in Rossleighan Park Portlaoise wit a 1.15 pm kick off