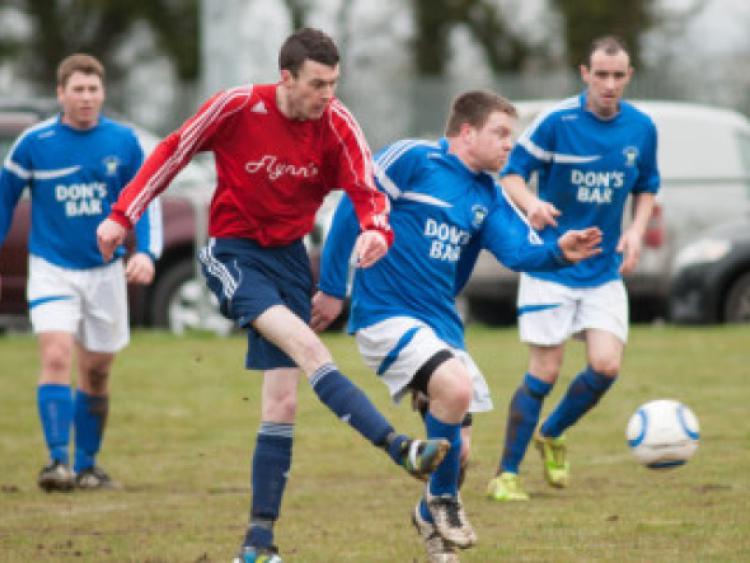 There will be at least two Laois sides in the quarter-finals of the CCFL’s top cup competition, the Combined Counties Cup, as the draw for the last 16 has thrown up two all Laois ties.

There will be at least two Laois sides in the quarter-finals of the CCFL’s top cup competition, the Combined Counties Cup, as the draw for the last 16 has thrown up two all Laois ties.

Premier Division Clonaslee made it through to Round 4 with a 3-2 win over Moate Celtic in Tullamore last weekend and will have home advantage for the next round.

The second all Laois fixture will see Arlington, currently second in the top flight, host Noreside Celtic who accounted for Tullamore.

There are three other Laois sides still in the competition with Mountmellick drawn away to Premier Division strugglers Gallen Utd while the eventual winners of the outstanding third round tie between Stradbally Utd and Towerhill Rovers will host St Peter’s.

Midlands Celtic were not in the hat for the fourth round draw for the CCFL Shield but the Portlaoise outfit almost pulled of the biggest shock of any CCFL season last weekend. Currently third in Division 4A, Midlands Celtic brought the fourth placed side in the Senior Division, Clara Town, all the way to penalties before losing out 5-4 in the shootout.

One Laois team that did pull off a shock result at the weekend were Rosenallis. With just one win from their previous 12 games in the Premier Division, last Sunday they defeated second placed side Willow Park B by 3-2 in The Grove. The result does a massive favour for their near neighbours Clonaslee Utd as it leaves them still with an outside chance of gaining promotion.

Stradbally’s hopes of gaining promotion from Division 1 however suffered a setback as a late goal saw them lose 1-0 to fellow promotion chasers Templevilla.

While they still remain second in Division 3A, Ballybrittas’ hopes of a top two finish were dealt a major blow as they lost by the odd goal in seven against Raheen in their all Laois encounter. The win gives Raheen breathing space at the bottom of the table.

Meanwhile in the all Laois Division 4A, leaders Portlaoise Shamrocks and second placed Portarlington Town both recorded comfortable wins as that division looks all set to go to the wire.