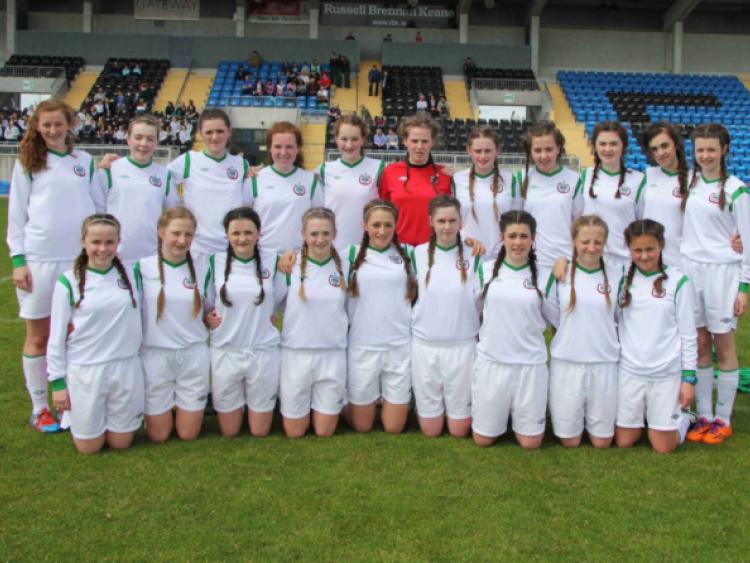 A goal in the last minute of normal time for Salerno won the game for the Salthill side and robbed Scoil Chríost Rí of what would have been an historic double.

A goal in the last minute of normal time for Salerno won the game for the Salthill side and robbed Scoil Chríost Rí of what would have been an historic double.

It was an excellent goal from Sadhbh Doyle, her second of the day, that settled the tie leaving Scoil Chríost Rí no time to fashion an equaliser.

Scoil Chríost Rí had won the First Year All Ireland title the previous week in the same venue and they looked to be on course to add another national title as they outplayed their opponents for much of the game.

In front of their vocal supporters in Athlone Town’s home ground last Thursday, the Portlaoise side created numerous opportunities over the hour but they found Maria Burke in the Jesus & Mary Secondary School goal in exceptional form as she made a string of fine saves to keep her side in the game.

Seven of the side who started the First Year Final the previous week were named in the starting 11 by manager Stephen Goggin for last Thursday’s U-15 encounter.

They started strongly and created a string of early opportunities. A good run from Chloe Langford ended with a pinpoint cross that picked out Emma Lawlor but her effort forced a super save from Maria Burke. The rebound fell to Coleen Rickard but her shot went inches over the bar.

Three minutes later, Lawlor dribbled through the Salthill defence but again she was denied by the sharp reflexes of Maria Burke.

However with 11 minutes on the clock, Scoil Chríost Rí’s early pressure told when Emma Lawlor, who bagged five in the final the previous week, opened the scoring. Again she danced her way through the Salthill defence before curling her shot past the ‘keeper into the bottom right corner of the net.

With midfielder Gillian Keenan outstanding in both defence and attack for the Portlaoise side, they continued to pile on the pressure.

Midway through the half, the Galway side mounted a rare attack but a shot from Sadhdh was well saved by Aimee Keane.

Just before half-time, Emma Lawlor almost doubled her total in spectacular style. After instantly controlling a cross from the left wing at the edge of the box, she swivelled and unleashed a powerful volley goalward. With Maria Burke rooted to the spot, the ball tailed inches wide of the post leaving Scoil Chríost Rí 1-0 up at the break.

They continued to press forward at the start of the second-half with no success but there were indications at the other end that Salerno were coming more into the game with formidable centre-back partnership of Maeve Phelan and Isabelle O’Toole kept on their toes by the lively Sadhbh Doyle.

Emma Lawlor and Coleen Rickard both went close to extending the lead for Scoil Chríost Rí but 13 minutes from time, Salerno drew level when the aforementioned Doyle cut through the defence before driving the ball past the isolated Aimee Keane into the bottom corner of the net.

Scoil Chríost Rí pushed hard to get the all important winner and the Gillian Keenan came within inches of doing so when her strike from all of 30 yards thundered off the crossbar.

However despite dominating the game and creating the majority of the chances, Scoil Chríost Rí were dealt a late sucker punch when Sadhbh Doyle scored a super second goal to snatch the win. A precise 1-2 with Maedhdh Corcoran put Doyle in behind the defence and she made no mistake with her finish into the bottom corner.

Scoil Chríost Rí players fell to their knees in disappointment when the final whistle went soon after and they will certainly feel this is a game they should have won.

However, considering that seven of the side are first years, it was a super achievement to reach the final winning the Leinster title along the way. It has been a memorable season on the soccer field for the school’s sides under the stewardship of Stephen Goggin, Tom Moss and Karen Duggan and it bodes well for the future that such a young side is already showing this much potential.