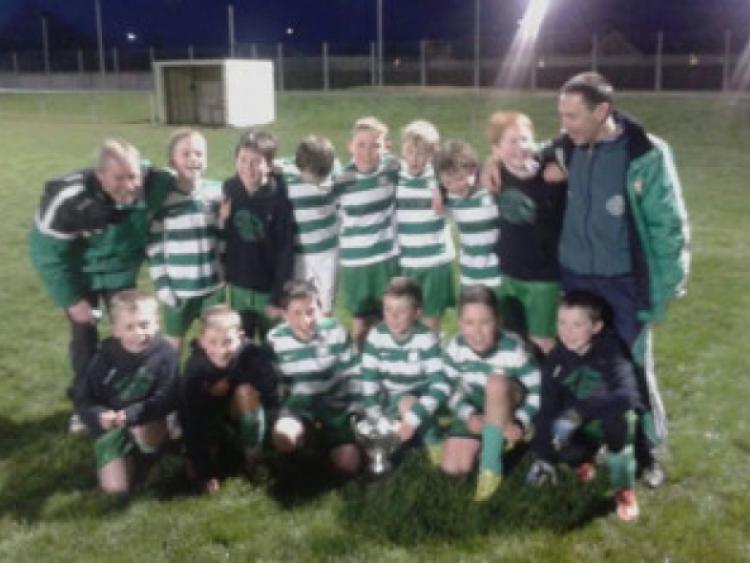 Portlaoise AFC U11’s clinched the MSL Major League and Cup double when they defeated Tullamore by 3-2 in a thrilling cup final in Athlone recently.

Portlaoise AFC U11’s clinched the MSL Major League and Cup double when they defeated Tullamore by 3-2 in a thrilling cup final in Athlone recently.

Portlaoise had a wonderful start when Aaron Doran controlled a beautiful pass from Brian Smith and placed his shot across the keeper low inside the far right hand post.

Not to be outdone, Tullamore levelled matters direct from a fortuitous free kick from their star player Alex. Portlaoise then dominated play and were rewarded ten minutes later when Aaron Doran returned the compliment to Brian Smith with a good diagonal pass. Smith feinted to his left then took the ball inside the defender before pulling a beautiful shot back inside the left hand post to make it 2-1.

Things got better when the industrious Colin Conroy found Jason Horan with a pin point pass which Jason smashed first time across the keeper into the bottom right. 3-1.

Tullamore, playing a more direct style, had the occasional opportunity. Within two minutes of half time Alex struck again. First he saw his powerful strike headed clear but he immediately latched onto the loose ball and shot again. ‘Keeper Jamie Callaghan turned the ball on to the post and then fielded the ball when it came back off the post. To the surprise of both sets of supporters a linesman awarded a goal. At half-time it was 3-2 for Portlaoise.

The cross breeze rose during the second half and as a consequence less goal chances were created. Tullamore had what seemed a legitimate goal from a direct free kick disallowed with ten minutes to go for an infringement on the Portlaoise ‘keeper O’ Callaghan. Coaches Pat Horan and Andy Doran used all their subs to good effect in the course of the second half. Final score Portlaoise 3 Tullamore 2.