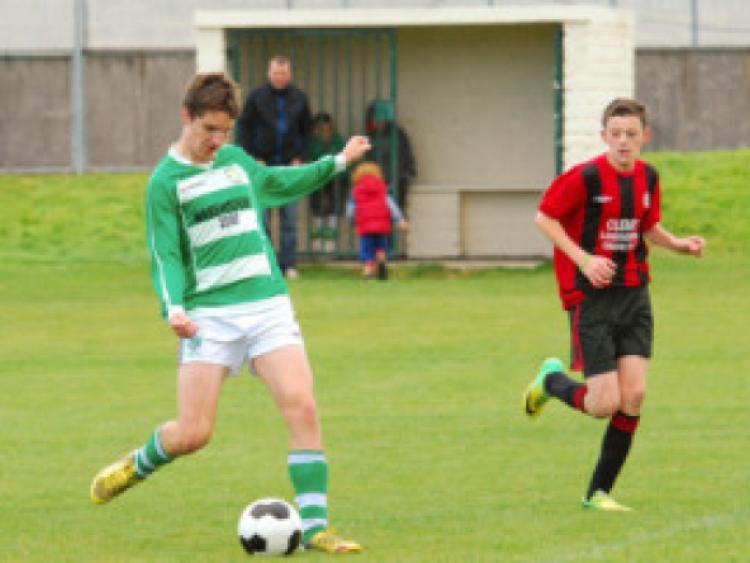 Portlaoise Town got the three points in this hard earned victory over a well drilled and improving Gracefield team who will be a match for any team this year.

Portlaoise Town got the three points in this hard earned victory over a well drilled and improving Gracefield team who will be a match for any team this year.

The MSL have restructured the divisions this year with a East and West division comprised of eight teams in each division. The top four in each division will comprise the MSL Major Division and the bottom four in each division will comprise Division 1 and these matches will start after the Christmas break. Portlaoise started well and had two good chances early in the game but Joe Nevin shot wide after good work by Jack Langton and Ger Ryan shot over the bar. Gracefield then got a great chance at the other end but their striker shot just over.

On 25 minutes, Portlaoise took the lead when a great passing movement involving Colum Dunne Joe Nevin and Aaron Wright which saw Wright send in a perfect low cross for Fionn Scully to finish in style and make it 1-0.

Gracefield then created two more good chances but Sean McCormack saved well on each occasion. Joe Nevin went close on 35 minutes but the Gracefield ‘keeper make a brilliant save to deny Nevin. Portlaoise then got their second just on half-time when Aaron Wright chipped the keeper with a brilliant lob to make it 2-0.

Gracefield then introduced Rory Doyle in the second half and his skill and speed made life difficult for the Town defence. On 50 minutes, Doyle gained possession inside the Portlaoise box and he finished in style to make it 2-1. Doyle then hit the outside of the post on 60 minutes when Gracefield produced a great passing movement and sent him clear on goals.

On 65 minutes Aaron Wright got his second after good work by Charlie O Brien on the left side of midfield created the chance and it make the score 3-1.

With 68 minutes elapsed, Portlaoise score d again when after a brilliant passing movement involving Colum Dunne and Joe Nevin set Fionn Scully up and he finished with a brilliant volley into the top corner to leave the score 4-1.

Entering the closing minutes, a brilliant run by Ruairi Lewis saw him beat three players before sending Padraig Kirwan in on goals but the Gracefield keeper made a brilliant save to leave the score 4-1 at the final whistle. Gracefield put it up to Portlaoise for most of this match and will be a team for the future in this league. Best for Porlaoise were Jason Maher, Padraig Kirwan, Charlie O Brien and Jack Langton with Colum Dunne shading the goal scorers Aaron Wright and Fionn Scully for man of the match. Portlaoise play Killeigh next Saturday in Rossleighan Park in the league with kick-off at 11.15am