Mountrath Third years learn about Jews in Poland, past and present 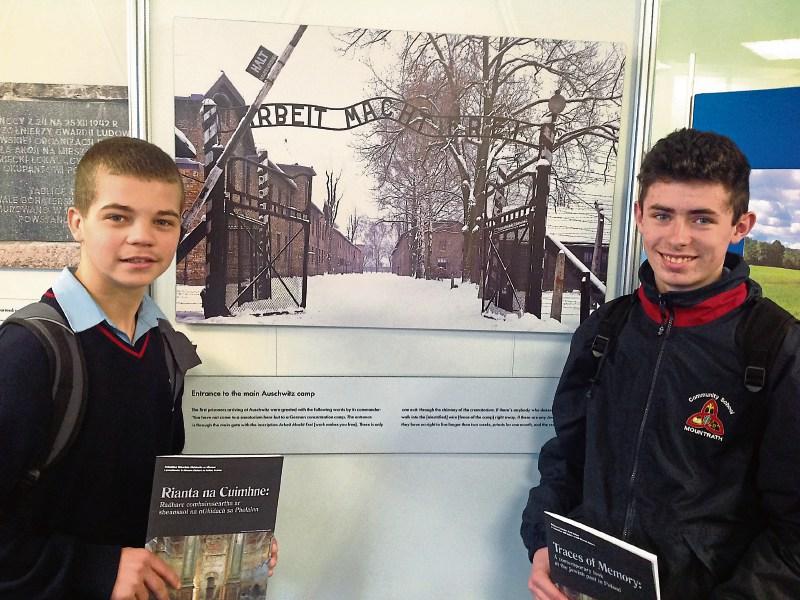 The third year students of Mountrath Community School have gained a new insight into the Jewish holocaust, and its survivors.

Last Tuesday, February 23, the 3f students spent a day at an exhibition titled 'Traces of Memory: a Contemporary Look at the Jewish Past in Poland'.

The students spent time examining photographs and text about the Holocaust and how it destroyed much of the Jewish culture in Poland.

They also watched a film based on 'the traces of Memory' and the holocaust survivors who are still living in Ireland.

Mountrath students were deeply impacted by what they saw.

“That infamous photo at the entrance to Auschwitz 'with the words Arbeit macht frei' (work makes you free) was very chilling and a harsh reminder of the mass murder during the Holocaust,” said student Gearoid Bowe.

Hugh Doheny was struck by an image of a wall made of fragments of Jewish towmstones.

“The Lamentation wall in the grounds of the Rema Synagogue, Kazimierz, made with the fragments of Jewish Tombstones stood out. It was incredible to think that the entire wall was made from Jewish tombstones,” he said.

They were inspired by how the Jewish community survived and healed.

“It was a very interesting display of the relics of Jewish life and culture in Poland,” said Hugh Doheny.

”It was important to see that Jewish life does continue in contemporary times in Poland and almost every European country,” said Amy Behan, who also found “inspirational” the photos marking the March of the Living in Kraków, and other Jewish festivals.

The students were also impressed with a photo of the Jewish/Christian memorial to Maria Djik, a Christian who saved the lives of many Jews in Poland, which bears the message, 'He who saves a single life, saves the world entire'.

“Overall, the students learned about the devastation of the Holocaust, but also the healing and reconciliation as a way of moving on from such a great catastrophe,” said teacher Joan Hallessy.

“These photos prompt us to consider the lives and fates of the Jewish community during peace and war,” she added.

The exhibition in Dublin City Library was organised by the Holocaust Education Trust of Ireland and the Galicia Jewish Museum in Kraków, Poland.

The photographs and text about relics of life and culture in Polish Galicia offer an accessible view of the Jewish past that was destroyed in Poland. See HetIreland.org