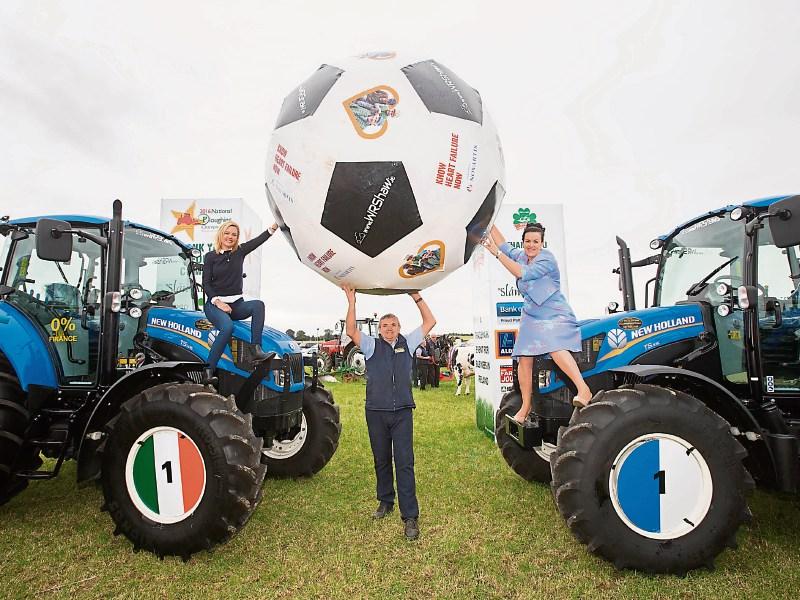 Ireland’s first Heart Failure Tractor Football Tournament, to rev up awareness of Heart Failure symptoms among the farming community, will kick off at the 85th National Ploughing Championships, from September 20 –22.

The Offaly versus Laois, three-a side-teams will battle it out in WR Shaw New Holland tractors, trying to get the massive seven foot football through the posts, with celebrities commentating on this unique tractor event.

The ‘Know Heart Failure Now’ campaign, supported by the Heart Failure Patient Alliance and Novartis Ireland Ltd., will be officially launched at the Ploughing Championships as agriculture is a predominantly male dominated sector, and Heart Failure mainly affects men.

As part of the campaign, the ‘Know Heart Failure Now’ stand hosted in the Health and Wellness tent, will invite visitors to speak to healthcare professionals about the symptoms and risk factors of Heart Failure. Free tests for those considered at risk of Heart Failure will also be provided at the stand.

“Tractors are at the heart of the farming community and many of us could be accused of looking after our tractors better than our own heart health.

“This is the first time a Tractor Football Tournament has ever been held in Ireland – maybe even the world! So we’re looking forward to great excitement and hope this initiative drives visitors to the ‘Know Heart Failure Now’ stand.”

“Our Offaly versus Laois branded New Holland tractors and expert drivers will be doing their bit to increase awareness for Heart Failure – we want everyone to take more care of their heart.

“My mother sadly passed away from a heart condition so I have a very personal link to this campaign.

“I encourage everyone attending the Ploughing to become a tractor footie supporter in aid of Heart Failure awareness.”

The heart is simply a pump, just like any pump around the farm.

“When the efficiency of the pump drops Heart Failure can develop, causing symptoms of tiredness and breathlessness when doing normal tasks and swelling of the feet or ankle.

“ It is a serious but manageable condition that affects approximately 90,000 people in Ireland, with up to one in five people at risk of developing Heart Failure at some point during their lifetime.

“One in three people in Ireland mistake Heart Failure symptoms for signs of aging, and one in four wait a week or more to seek medical advice when experiencing these serious symptoms.

“However, improved understanding of Heart Failure, early diagnosis and new treatments can allow patients to live longer, feel better and be more active.”

The ‘Know Heart Failure Now’ campaign encourages those at risk of Heart Failure who have more than one of the symptoms to speak to their healthcare professional and request a heart examination.

“By bringing attention to this condition, the ‘Know Heart Failure Now’ campaign aims to increase the public’s awareness and understanding of Heart Failure in order to help people take action earlier and thereby improve their outlook.”