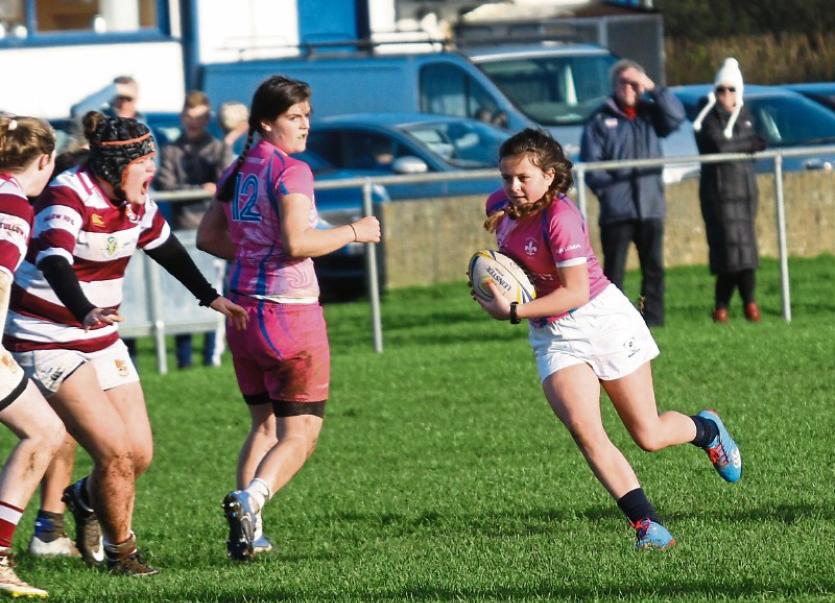 With seven Leinster players on the field it was always going to be a spectacle but who would have expected such a pulsating game to start the year off.

The encounter with Tullow had been long awaited having been postponed on three occasions and finally moved to Sunday 3rd January. Both teams were eager to play each other and some friendly pre-match banter had heightened spirits.

A perfect catch by captain Eimear Corri from the Tullow kick-off led to some speedy interplay between with Tiarna McEvoy allowing Corri to steal a try in the opening minutes. Tullow kicked-off again and the Portlaoise forwards gained possession and moved play steadily into the Tullow half. Aoife Bracken and Sorcha Mathews consolidated drives by Emma Hooban to retain possession.

When the ball was released it seemed as if every Portlaoise player was making themselves available to score. Emily Horgan picked up and made ground, off-loading to Orlaith Phelan who sprinted forward to be tackled just short of the line where Horgan was quickly on her feet to receive and crash over the line for a try.

Portlaoise followed with a passage of play that showed dominance in every aspect of the game. There was an overall impression of balance to the side. When the break came from clever off-load by Aoife McNeill, Eimear Corri scored a try in the corner to give a 15-0 advantage.

Tullow responded with two breakaway tries in quick succession opening the door at 15-10. Portlaoise again took the driving seat forcing a penalty ten metres from the line. Quickly taken, Emma Hooban with support from Aoife Bracken and Sorcha Mathews thundered over for a try which was skilfully converted by Liz Brophy.

An emboldened Tullow reacted with a try and conversion. Just before whistle Louise Scully and Orlaith Phelan linked with Eimear Corri who managed to touch down in the corner to bring the half time score to 27-17.

The second half opened with Louise Scully evading the opposition and scoring beneath the posts for Liz Brophy to convert. An interplay between forwards and backs of many phases and deft passing brought play into the Tullow twenty-two where finally Áine Camphuijsen passed to Charlie Walsh who broke through the defence and put Mairéad Keogh in for a try. Tullow replied with a try and conversion. Robyn Mullen made some blistering surges with Emily Gowing and Róisín McWey making the pace. Aoife McNeill linked with Charlie Walsh who off-loaded to Eimear Corri to score beneath the posts. Liz Brophy converted. Tullow again fashioned a try. Orlaith Phelan now made the running passing to Tiarna McEvoy who made ground off-loading to Eimear Corri who stepped the defence and sprinted beneath the posts.

Liz Brophy again converted. Some solid play by the forwards brought play deep into the Tullow half allowing Emma Hooban to provide the coup-de- grace and bring the final score to 58-29.