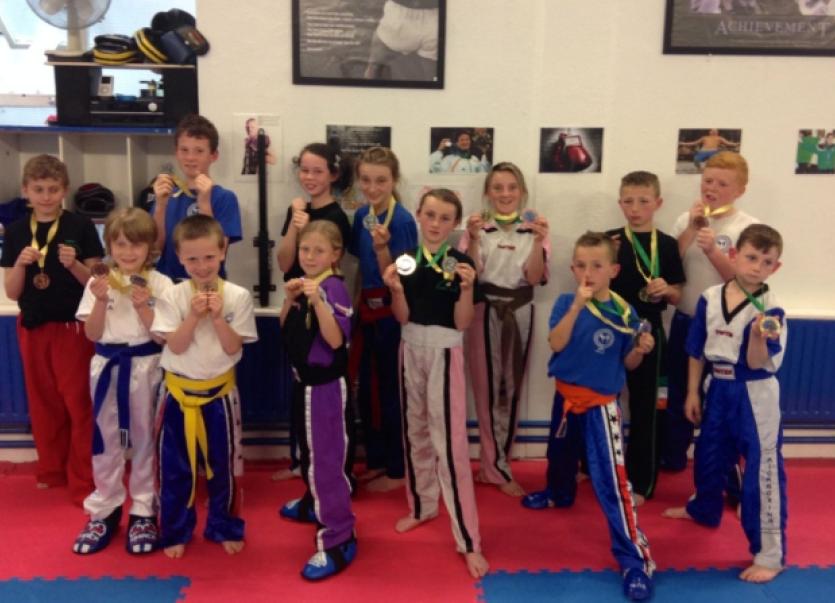 This saw five of the junior members of the club compete. First up was Byron McGuirk (11), who won the event last year. Byron sailed through his first fights, stopping his opponent in his second fight with strikes, to reach the semi finals.

Byron competed very well on the day and came away with third place after a very tough fight with a very controversial decision.

Next to have a shot at glory was Byron’s younger brother, Corey (8). Corey came away with a silver medal after a super fight in the semi-contact division.

Next up were the two McInerney sisters who are used to the fight scene at this stage. First up was Nicole (12) who got third last year in the event. Nicole fought so well on the day and came away with a bronze medal. Joeleen (11) was up next. Joeleen won the top spot and became All Ireland Kickboxing Champion. Coach Shane Culleton said “The girls have been so dedicated to their training and have trained hard, the same as all the other athletes. I was thrilled for them both especially Joeleen who truly earned her title.”

Finally up for the busy club was the youngest member of the team, Callum Carroll (7). Callum was competing in the semi contact division. Coach Shane Culleton commented that he has only seen a handful of kids so dedicated at that age and Callum is one of them.

Next up for the club was the Dublin Interclub Championships which saw a team of 15 junior fighters competing. The team secured a number of medals on the day. The team secured six bronze medals with two of those belonging to three of the clubs youngest members, Jack Hennessy (6), and Ryan Millard (6).

It was Jack’s second time to compete while James and Ryan had their first fights on the day. Ronan Dunne (6) also competed in his first fight for the club, fighting very focused on the day and doing his club proud. Callum Carroll was also in action and was unlucky not to secure a medal. Stephen Lynch, Jack Tobin and JP Daly took home the other three bronze medals for the club.

Ryan Coss, who has had an amazing year to date, having already won four top spots in his first year in the club, took second place on the day along with his team mates Stephen Lynch, who got to compete in another division and secured another medal for himself.

Top spots also went to Chloe Shortall Culleton (11), who was absent for the All Irelands so she was eager to get back to her winning ways, Nicole McInerney (12), Martine Daly (8) and Corey McGuirk (7).

Coach Shane Culleton commented that they all worked so hard to be ready for the competition and they all performed so well on the day. Hats off to them all for the amazing heart and focus they showed on the day.

The next challenge for the Mountmellick based club is the Combat Open in Edenderry which will be a great test for the club with some of the top fighters in the country competing at this event.

The club would like to say a huge thank you to the club committee, all our coaches, our parents, our secretary and Fr Michael Murphy for their constant support and dedication to our club. Also a massive thank you to our main sponsors Moloney’s Gaelic Bar for their continued work with us. TEAM LMA – Dream, Believe, Achieve.

For more information on Kickboxing in Laois contact 086-3399287 or find us on Facebook at Laois Martial Arts.