Battling laois get no reward 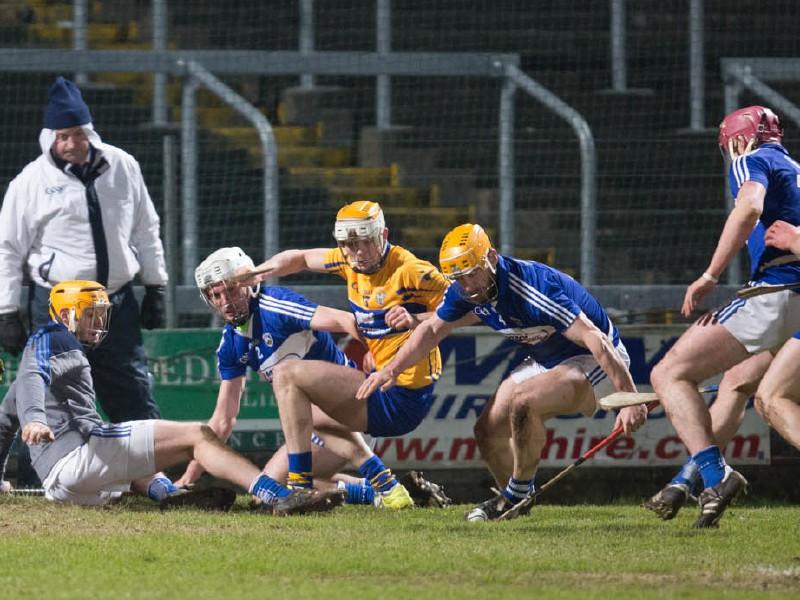 It was an improved performance, but Laois still await their first win in NHL Division 1B this year after an eight point loss to Clare on Saturday night.

A goal for the Munster men just before half time proved to be a crucial score, and a late flurry of points saw them end up comfortable winners, although Laois probably deserved to be a bit closer.

The work rate throughout from Cheddar Plunkett's men was impressive, but their shooting was the real issue on the night, as every missed shot left them further and further away from getting a result.

The second half in particular made for frustrating viewing for Laois supporters, with Laois hitting eight wides in that period alone. Most of them were concentrated into a 15 minute spell midway through the half, as Laois' chance to reel in a six point deficit slipped away.

With another six wides in the first half, Laois finished with 14 wide sin total, and with a tough away game against Limerick coming up this Saturday night, it doesn't leave Seamas Plunkett and his back room team with much time to work on things before they are out again.

While he will be hoping the shooting improves, he will probably be happy enough with the work rate he witnessed in this game, and would take a repeat of it against Limerick.

The work rate in the forwards was improved, and on a number of occasions Laois managed to turn over possession from the Clare defence high up the field, which is a welcome sight.

Laois are still very much a work in progress though, and it's only when a succession of performances are turned in that we will see significant improvement from this new team the Laois management have constructed.

As for this game, the opening minutes had looked ominous for Laois as the visitors started in a whirlwind, with Aaron Cunningham and Gearóid O'Connell both pointing inside two minutes. They could have had a goal moments later, but Shane O'Donnell's run was cut short on the 21 yard line, and Colin Ryan tapped over the free.

Laois looked in real trouble at this stage, but veter forward Willie Hyland steadied some early nerves with a brace of points to get them back within one.

That slowed Clare's momentum somewhat, but they eventually took control once again, as John Conlon pointed in the tenth minute. David Reidy added two more and the visitors were now four ahead, with Leigh Bergin's point just about keeping Laois in touch.

When Clare replied with another quick-fire double to push five ahead they again looked primed to run away with things, but to Laois' credit they started to grind out scores.

They should have had a goal in the 24th minute when PJ Scully and Willie Hyland worked a two-on-one attack, but Sculyl opted to take the shot himself rather than pass it off to an unmarked Hyland, and his effort was blocked and eventually cleared.

All was not lost, however, as Zane Keenan won a puck out and fired it over the bar before landing two frees, as Laois again threatened to reel Clare in.

As was the pattern of the game, Clare kicked on when they needed to, with three more unanswered points giving them their biggest lead of the half at 0-12 to 0-6. Laois looked to have addressed that with a couple of points before the break, but a speculative ball into their penalty area wasn't dealt with, and in the resulting scramble, John Conlon was left with the simplest of finishes, as he tapped the ball to an empty net.

Zane Keenan managed to get a point back for Laois before the half time whistle went, but that still left Clare 1-13 to 0-9 in front at the break, and there only looked line one winner from there.

Laois started the second half brightly, but as would be a recurring theme in the closing 35 minutes, their shooting would let them down. They dominated the opening exchanges, but only had a 65 from Enda Rowland to show for their efforts after a clutch of missed chances in the first few minutes of the half.

The next 20 minutes or so saw plenty of effort, but not much in the way of scores, as both sides struggled in front of goal. The positive thing for Laois was that, despite playing with just five forwards, that they were at least creating chances, but having to shoot from further out than they would have liked meant that the chances of hitting the target were lower, and so it proved.

Paddy Purcell, PJ Scully and Cha Dwyer, amongst others, were guilty of missed chances, and any hopes of a result were lost.

Clare weren't much better themselves, and they were guilty of some poor shooting, as they went 22 minutes in the second half without a score from play, but they eventually got their eye back in for the last ten minutes or so to turn a scrappy performance into a comfortable win with a string of late points, as they won by eight in the end.