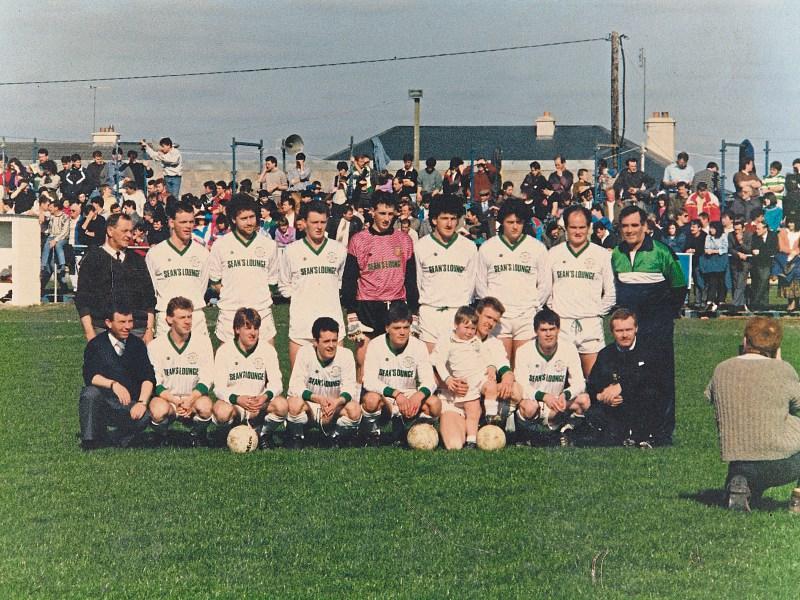 This month marks the 25th Anniversary of Portlaoise AFC's participation in the FAI Senior Cup for the one and only time to date.

The team played two games, beating famous Dublin nursery Home Farm 3 -1 before going down to Kilkenny City 2-3 in the second round.

The foundation for the success goes back to 1984, when the club returned to play in the Dublin AUL league after nearly a decade back playing in the Leinster Junior League Counties Section. The first few seasons saw Portlaoise consolidate themselves in the league with no great success, but the turning point came in 1988 with the appointment of Christy Cahill Snr as manager.

After a strong finish to that season Portlaoise were in confident form starting the 1989 campaign, and went through the season unbeaten to take the Division 2 title in style. The step up to the Premier 'C' Division was seen as a big step , but the team rose to the challenge in style, and despite only one league defeat they had to meet Ballymun United in a play off in Tallaght. Again they dug deep to record a fantastic 6-1 victory to take a second title in a row.

Portlaoise were now offered a place in the newly formed Intermediate division, and after some major reservations the decision was made to take up the challenge, and what a historic turning point it was.

The season started with the Intermediate Cup first round, where the teams that got through to round five qualified to meet the League of Ireland teams in the FAI Senior Cup. Portlaoise travelled to Whitehall Rangers for the first round game without realising the importance of the tie or even in their wildest dreams thinking of the Senior Cup, the priority for the season being to hold their own in the tough new division.

After a scoreless draw in Dublin the sides met again in Rossleighan Park where Portlaoise won 2-0. Next up was an overnight trip to face Drogheda Town, and despite the heroics of Ger Dunne in goal they found themselves 3-0 down at half time. This team had character however, and a superb second half come back yielded a 4-3 victory.

Next up was another trip to Dublin to face Midland Celtic, and after a 2-2 draw Portlaoise won the replay 2-1. The fourth round draw gave Portlaoise a home draw at last, the problem was it was against Leinster Senior League highfliers Lusk Utd, who had qualified for the senior cup the previous season.

The prize at stake was qualification for the Senior Cup, and despite a brave 2-2 draw Portlaoise seemed to have missed their chance, now having to travel to North Dublin for the replay. With a large travelling support behind them Portlaoise again upset the odds, with goals from ace marksman John Loughlin, Christy Cahill and Aengus Burke sealing a famous victory.

The draw for the Senior Cup was made in January, and was favourable to Portlaoise with a home tie against the famous Dublin club at the time, Home Farm, who were managed by former Irish international, the late Ray Tracey. Despite this the players were quietly confident that they could cause an upset against their renowned opposition as they were growing in confidence, with some fine displays in the league against a lot of teams with ex-League of Ireland players in their ranks.

The club pulled out all the stops to have Rossleighan Park up to the required standard for the game on March 10th, including temporary scaffolding and press facilities. After poor weather during the week the day itself turned out well, with football supporters from all over the county coming out to swell the crowd to over 3,000.

The team was made up of a mixture of youth and experience at this stage, and their team spirit and work ethic was second to none. The defence was rock solid, with Ger Dunne in goal and Pat McCormack, Mick Coleman, Gordon Conroy and Dave Griffey providing excellent cover in front of him. The midfield trio of Christy Cahill, Mick O'Loughlin and Aengus Burke had a tremendous mixture of skill and strength in the tackle, while up front ace marksman John Loughlin was joined by Johnny Comerford, the most skilfull player on the pitch, and Kevin Conroy, whose work rate and ability to hold up the ball was superb.

The game started slowly for Portlaosie, with Home Farm having the early possession, but Portlaoise slowly settled in and created some half chances. The breakthrough came after 20 minutes, when a John Comerford free kick came back off the crossbar and Kevin Conroy was on hand to send a powerful header to the net.

Portlaoise grew in confidence now and took control of the game, and they got their just reward on thirty five minutes when John Comerford rattled the net again with an exquisite strike. Home Farm needed the next goal to get back into the game, but Portlaoise remained strong, denying them any clear cut chances.

Twenty minutes into the half Portlaoise wrapped up the tie when captain Aengus Burke fired home from close range. Portlaoise introduced the experienced Sean Wright and Con Dunne at this stage to close out the game, with the last piece of action being a late consolation for Home Farm.

They draw for round two paired Portlaoise with local rivals Kilkenny City, who were a boosted by a Dublin based squad and managed by former Irish underage manager Joe McGrath. Ironically the team contained one Laois player, Tony Dunne from Durrow. Portlaoise were boosted by an even bigger crowd of nearly 5000 this time, and got a dream start when Dave Griffey scored with a powerful header from a corner. Portlaoise were on a high now, and two 'goals' from John O’Loughlin and Aengus Burke were controversialy ruled out for offside.

Kilkenny took advantage of these let offs and equalised before half time. Portlaoise again regrouped however, and centre-half Pat McCormack put them in the lead again with a fine header from another corner. The game flowed from end-to-end in the second half, but the experience of the League of Ireland side showed with two goals in the last fifteen minutes to end Portlaoise‘s dream.

Overall it was a tremendous period for the club, with the Youth, 'B' and 'C' teams all having success at the time. Hopefully the current group of players can bridge the gap and qualify for the Senior Cup before the 30th Anniversary.

To mark the occasion a kick around takes place in Rossleighan Park at 4.30pm, followed by a get together in Kavanagh’s Pub at 7.30pm. Any one involved at the time is more than welcome to attend, especially supporters.