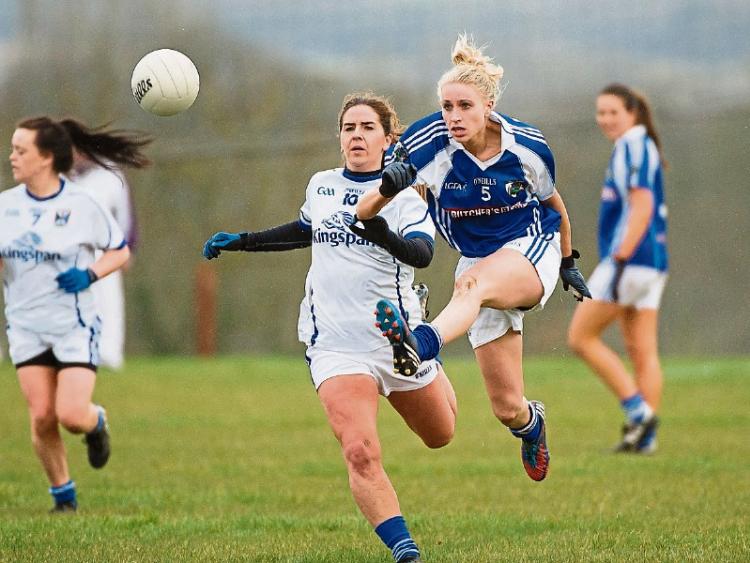 They say slow and steady wins the race and this can certainly be applied to the progress being made by Laois.

Their league campaign started with heavy losses to Clare and Donegal, followed by a victory over Meath and a narrow loss to Kildare, but the game against Cavan on Sunday afternoon in Killeshin marked a stark improvement in the Laois camp.

Laois played with better movement than the previous games and created good chances. For manager Kevin Doogue, the next plan of action is to convert those chances. Laois have struggled with fitness over the past two seasons but their performance against the fit Cavan side, who have been training three months longer than their Laois counterparts, indicates that fitness won’t be an issue in the 2016 championship.

Laois lead 0-9 to 0-7 at half time, with the lethal accuracy of Noirin Kirwan giving Laois a two point cushion at the break. Laois tried a new offensive tactic of playing captain Laura Marie Maher in the full forward line on her own, with all other Laois forwards on the half forward line. Maher is a strong fielder of the ball and evidently the aim was for the speedy wing forwards to run off her shoulder when the ball was kicked in to her, while it didn’t always work in this game it perhaps gives a glimpse into the possibility of utilising this move in future games.

Cavan were first on the scoreboard with corner forward Aisling Doonan slotting a point between the posts from a free. Martha Kirwan cleared the ball in the backs and it was worked up the field, with Fiona Dooley sending it over the bar to bring the sides level after six minutes. Laois tactic of sending the ball into the lone Laura Marie Maher in the full forward line almost paid dividends when Mo Nerney ran off her shoulder but her goal shot drifted to the left and wide.

Three points on the trot for Cavan through Donna English, Roisin O’ Keeffe and Aisling Doonan gave Cavan the lead with ten minutes on the clock. Laois stepped it up a gear however and began to move the ball better. They used support play to good effect and three points from frees and one from play by the sharp shooting of Noirin Kirwan gave Laois a 0-5 to 0-4 lead with fifteen minutes played. Cavan’s Niamh Halton and Mo Nerney swapped scores.

Cavan took the lead again with points each from Aisling Doonan and Aisling Traynor. As the half entered it’s final stages, Laois continued to apply the pressure and closed off the half with two points from Noirin Kirwan to give them a 0-9 to 0-7 lead.

Cavan started strongly in the second half, points from Sinead Greene and two from Caitriona Smith put them one ahead with 33 minutes played. Cavan’s Laura Fitzpatrick found herself sinbinned for persistent fouling but Laois Martha Kirwan got sinbinned herself a minute later for a tackle, despite it being her first time to be reprimanded by the referee. Laois day continued to disimprove when corner back Amy Loughman was sinbinned a few minutes later.

Cavan capitalised on this misfortune and sent three unanswered points over the bar; Cavan leading 0-13 to 0-9 with ten minutes remaining. Laois dug deep and worked the ball up the field with Noirin Kirwan slotting over a free to reduce the gap. Laois played with admirable urgency and heart and Laura Marie Maher almost brought the sides level when she caught the ball on the 30 yard line, turned her player and ran towards goal only to be denied by the quick hands of Cavan ‘keeper Clodagh Doonan.

Noirin Kirwan popped another free over the bar from long range as the clock ticked down. Cavan continued to attack however and two points by Niamh Halton kept her sides noses in front. Laois continued to create chances up front; Mo Nerney sent a free over the bar. Cavan’s Aisling Doonan added a point to the sound of the final whistle. Laois were visibly disappointed with the result but not scoring for twenty minutes tells it’s own story. Overall, the performance sent out a strong message to Laois supporters and their opposition; Laois are up for the championship.

The National League takes a break for the next four weeks, Laois are out next against Westmeath on April 3rd. Attention now turns to the Laois league which begins next weekend; fixtures are on Laois LGFA’s Facebook page.