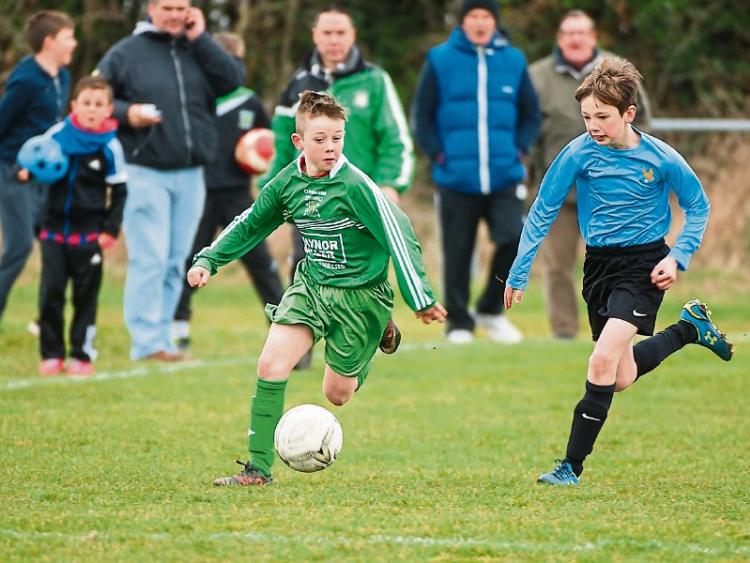 The game was only two minutes old when Belvedere's midfielder stepped into an offside position from a ball lobbed over the Portlaoise defence. Portlaoise had their first opportunity when Colin Conroy headed wide from an Aaron Doran free. On seven minutes Portlaoise won a free kick in a central position, 27 meters in front of the goal, when Colin Conroy was fouled but Aaron’s effort came back off the wall.

The Portlaoise central midfield of Aaron Doran and Colin Conroy were giving their vaunted opponents a torrid time in the centre of the park. A low goal kick to the Belvedere central midfielder was pounced on by the alert Conroy he played a neat ball through to Brian Smith, who turned inside the centre half and struck a firm shot wide of the right post.

On 16 minutes, totally against the run of play, Belvedere played a free long behind the Portlaoise central defence, the covering Michael Culliton was pulled back and the centre forward turned inside the centre half and dispatched a wonderful shot beyond Conor Graham. This setback forced Portlaoise to redouble their efforts.

Ben Dempsey, who was having a fine game on the right wing, passed neatly inside for Brian Smith to strike from distance, the keeper fumbled and recovered before Dylan White could capitalise. Ben Dempsey repeated the trick when he found Brian Smith with a great cross, Brian swivelled and struck first time only to have his effort blocked by the outstanding Belvedere centre-half. Portlaoise pressed relentlessly and an Aaron Doran corner, won by the efforts of Dempsey, was well fielded by the Belvedere keeper.

Belvedere countered quickly when a quick exchange created an opportunity for them, but their half chance that was cut out by Conall Rowney. Portlaoise were then unfortunate to have Brian Smith deemed offside from a quick corner, with the Belvedere left back appearing to play him on.

Belvedere responded with a fantastic move starting at the back that resulted with Conor Graham making a smart save at the near post. Graham was the hero again moments later when Belvedere should have went two up, but the Portlaoise 'keeper made a fantastic save from a fierce drive from their centre-forward from only 15 meters out.

On twenty five minutes, after good work down the left form Michael Culliton and Jason Horan, Jason found the outstanding Aaron Doran. He played a sweet ball between two defenders for Colin Conroy to run on to. Colin cut inside the covering defender and lashed a bullet into the top left corner of the net. It was no less than Portlaoise deserved.

Just before half time Portlaoise suffered a cruel blow when they lost centre half Aaron Brennan, who was having a great game, but he unfortunately went over badly on his ankle. Josh Hogan stepped into the breach and was to play solidly to the finish.

With Portlaoise attempting to get themselves reorganised at the back Conor Graham was forced to make a reflex save from a close in strike and Michael Culleton cleared to safety. At half time the scores level at 1-1.

Portlaoise went on the offensive at the start of the second half. From a quick short corner Jamie Preston drilled a low shot from an acute angle that was gathered by the keeper at the near post. Every ball was being strongly contested all over the park. Jason Horan sought to set up Luke Dunne O'Connor but Luke was foiled by Belvedere's vigilant right back.

However, things turned sour on what had been a wonderful spectacle when, 14 minutes into the second half, Colin Conroy was scythed to the ground by one of the Belvedere players. The referee was left with no choice but to give the player a red card as he had already been booked, but it was bad news for Portlaoise too. Conroy was forced to leave the fray with a suspected dislocated shoulder.

Portlaoise were visibly stunned to lose their gallant captain in such fashion. Belvedere now took hold of the centre of the field for the first time in the game. In the 51st minute they took the lead when their tireless midfielder, who had been playing second fiddle, all day sprang to life. He marginally beat the offside trap on a beautiful delivery over the top from and shot coolly past Conor Graham to give Belvedere the lead.

Portlaoise were now playing the counter attacking role, substitute Daryl Ntumba was now playing up front and despite his best efforts he was thwarted several times by either centre half who were both strong and fast. Samuel Emmanuel, Kyle Enright, Tiernan Cahill and Luke Dunne O'Connor were all introduced for Portlaoise. With two minutes to play Belvedere wrapped up the tie with a beautiful headed goal.

The question will always remain, would Belvedere have won if Colin Conroy and Aaron Brennan had not been forced off the pitch though injury? One thing is certain both Aaron Doran and Colin Conroy are among the best U-13 footballers in this country. Pat Horan and Andy Doran can be very proud of their entire squad, as each and every player gave his all in the quest for a major scalp.