Kestrels get the upper hand over Panthers in local derby 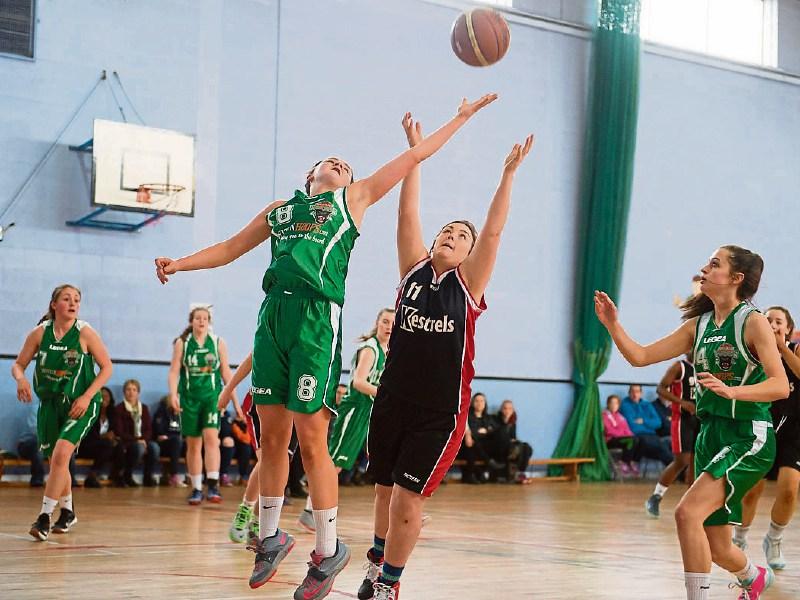 Portlaoise Panthers Ladies team travelled to Portarlington in the hope of taking a step closer to the Midland League title.

With only one loss against them before this game, another win would put them just one win away from taking League honours for the season but Kestrels showed great grit and determination throughout to keep their own title hopes alive and bring the competition right down to the wire.

Both sides now have two losses apiece with two games remaining so this home win for Kestrels was a big scalp to take after losing in Portlaoise just after Christmas by a big margin.

The first quarter saw the home side out of the blocks the quicker of the sides with baskets coming from Sophie Devereux and Cathy Mulhare. Sarah Fallon got going with three baskets in a row while Grainne Tomlinson replied with two baskets of her own inside.

Sinead Byrne and Kelly Anne Scully added further baskets with some well taken shots before Attracta Brophy responded with a three pointer to leave seven points between the teams, Kestrels leading 16-9 at the end of the first quarter.

Portlaoise Panthers came back strong in the second quarter with Brophy again on target from range to kick the visitors into gear. Tomlinson was causing problems inside the key on offense as she added another three points to the scoreboard which was followed up by another three points from Brophy.

Kestrels only managed to score six points in the quarter with a big three pointer from Kelly Anne Scully the highlight of these. But Portlaoise managed to grab the lead from Kestrels with five points from Emma Colohan, Portlaoise leading on a scoreline of 23-22.

The half time break worked better for Kestrels as it gave the opportunity to regroup and they did just that as they matched the visitors score for score in the opening minutes of the half. Sarah Fallon, Cathy Mulhare and Sinead Byrne all contributed for Kestrels while Emma Colohan and Roisin O’Connell kept the scoreboard ticking over for the Panthers ladies.

Scores began to dry up for Portlaoise at the end of the quarter as Kestrels began to take hold of the game. Two baskets from Kelly Anne Scully gave Kestrels a five point lead heading into the final quarter.

The momentum was now in Kestrels favour but Portlaoise were not yet ready to give up on this game and they drew level at 39 points apiece following baskets from O’Connell and Lorraine McCormack, while they traded free throws with Kelly Anne Scully and Dorothy Fahy the beneficiaries.

Kestrels went on a scoring spree with Sarah Fallon, Sinead Byrne and Kelly Anne Scully pushing Kestrels out in front with two big three pointers scored by the latter. Portlaoise responded with baskets by Michelle Hart and Lorraine McCormack but this was too little too late as Kestrels continued to push ahead with further baskets by Mulhare and two baskets by Orla Mullally.

Kestrels took the win by twelve points which leaves them level on points with Portlaoise at the top of the League. The final two weeks in the League will be interesting with both sides coming up against fellow Top 4 opposition with Clonaslee still in with a shot of clinching the League also if they can overturn Portlaoise in St Mary's Hall.

If teams are level on points at the end of the season, the League title will be decided by a play-off so all is still to play for.