Maher and Grant in the medals again 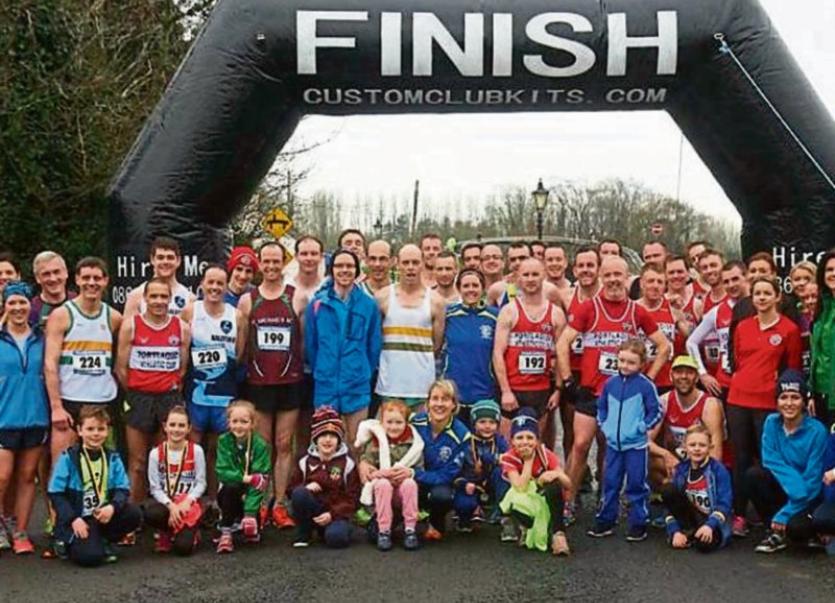 Despite the drizzle, a large crowd descended to the canal in Vicarstown on Sunday for this year’s running of the Downey’s Nissan County Senior Road Race Championships.

With a large inflatable gantry, the finish line could not be missed, and the crowds gathered round this and along the route to show their support for the athletes on show. This year’s event was hosted by Oughaval AC, and the ever-efficient John Scully made sure proceedings were run effectively and on time.

As has become the norm with the county road races this season, events kicked off with some non-championship road races for our juvenile athletes. These have become increasingly popular with our middle distance juvenile athletes, and the races provide then with a terrific opportunity to race on the road, and to get some good base times for some standard running and training distances. Plenty of fun and smiles too, which shows they are enjoying the competition.

The proceedings kicked off with the U-9 races, and these youngsters had a nice flat 400m stretch of road to contend with. The winner of the girl’s race was Cara English from St Abbans AC, with Leon Delaney from Oughaval AC winning the boy’s race. Not to be outdone by their younger sister, the English children kept it in the family with Evan English winning the Boy’s U-11 event over 400m, and older sister Seoighe winning the 800m Girl’s U-13 race in fine style.

The Girl’s U-11 race was won by Caoimhe Cuddy from Portlaoise AC, while the Boy’s U-13 race was won by St Abbans athlete Jack Fenlon. The U-15s also had 800m to race, and both Ciara Harrington (St Abbans AC) and Canice Whearty (Oughaval AC) won their races in fine style. As the ages increase, so do the distances, and there were some good runs from Oughaval club mates Cathal Connaghton and Orla Fennelly to win their U-17 event over 1,200m, with Fionn Marum running strongly to take the Boy’s U-19 race.

With the juvenile races complete, it was time for the senior athletes to take centre stage. The 4K Senior Ladies race had 23 participants, with race favourite Sharon Grant from Portlaoise AC taking it up from the start, and winning in fine style in a time of 14:25. In second place and making an impressive return from a spell on the sidelines was St Michael’s AC athlete Monica Corcoran, who finished the race in a time of 15.18, and bringing the first senior county medal back to her club in a long time.

The Senior Men had 8K to contend with, and spectators got to see all 36 of them run through the finishing gantry twice as they did almost two circuits of the race loop. Once again, the winner of the race was a given when Ballyfin AC’s Colin Maher lined up. Within the first kilometre of the race, Colin had a significant lead, which he continued to extend, winning the race by over two minutes in 24:57.

Again the race was on for the silver and bronze, and inside the final 2kms, James Haam (Portlaoise AC) took it up with Colm Burke (St Abbans AC) hot on his heels. These two forged ahead of the rest of the field, and with the finish line in sight, Colm made his move, and strode past James, to take the silver medal in 26.59, with James coming home in 27.01 to secure county bronze.

The final County Championship Road event will the Masters Road which will take place on Sunday 24th April in its long time home in Portarlington. This is open to all Laois athletes who are aged 35 or over (on the day), and is usually very competitive with plenty of individual and team medals up for grabs.

The host club St Michael’s AC usually put on a good show, and with some top notch after race refreshments, so there is plenty of great running and great food to look forward to.