Portlaoise claim Féile double as they see off Graigue 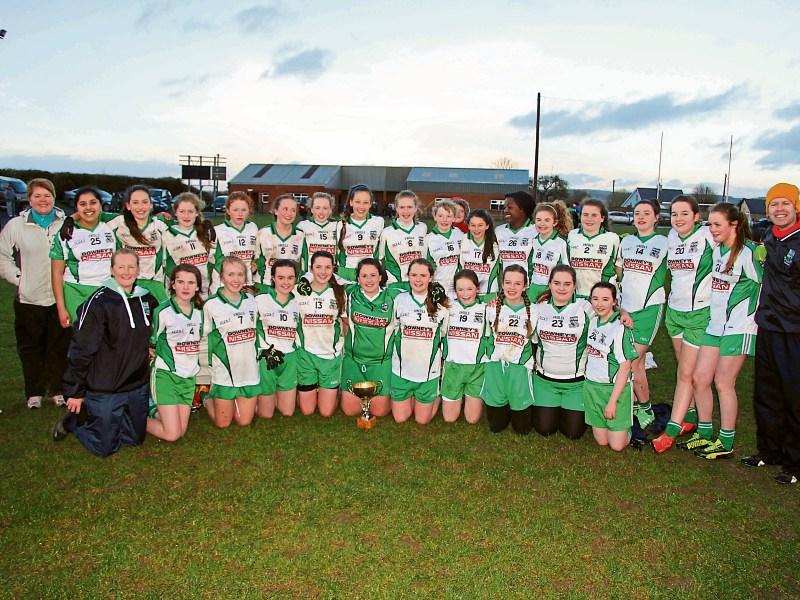 The Portlaoise U-14 ladies footballers made it a double for the club recently when they defeated Graiguecullen in the Féile final.

With their camogie team having claimed Féile honours already, it was the footballers who completed the set when they ran out convincing winners in their final.

The team began their journey by winning their group with hard fought victories against Sarsfields and Park-Ratheniska. Then it was Ballyfin that provided the next test at the semi-final stage of the competition.

In really testing conditions Portlaoise came out on top against a very good Ballyfin side. It was on to the final after that and it was the old enemy Graiguecullen who Portlaoise always seem to meet in finals.

The final was played in Timahoe in front of a large attendance. The football was played in difficult conditions which made any flowing football difficult to come by. Portlaoise, who were many people’s favourites, were quickly out of the blocks and took control of the game.

Despite a late rally in the first half by a very committed Graiguecullen side it never looked like Portlaoise were going to let go of the title which they had won the previous year. Portlaoise went on to win with a score line of 4-9 to 1-2.

Again, at the final whistle, the scenes of celebration and joy were evident as supporters and mentors raced onto the pitch to congratulate the Portlaoise team.

These are great times for Portlaoise Camogie and Portlaoise Ladies football. Both clubs can be extremely proud of the girls, and appreciate the time and effort that goes into competing and winning at this high level. They are extremely fortunate to have so many talented athletes in their ranks and this fact is most evident when you consider that twelve girls competed on both the camogie and football teams.

Best of luck to Portlaoise in the National Finals in June.