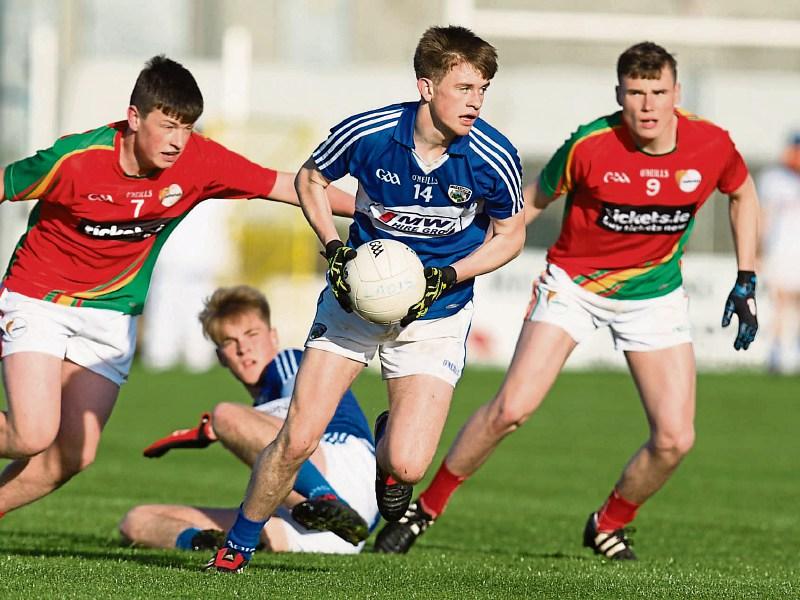 Laois minor footballers eased themselves into the quarter-finals of the Leinster MFC last Wednesday night, as they easily accounted for Carlow in Netwatch Cullen Park.

A Johnny Kelly goal after just ten minutes set Laois on their way, as a dominant start to the game left them so far ahead of the home side that there was never any real prospect of a comeback.

It was a comfortable win in the end for Laois, but manager Mark Rooney won't have learned too much from the outing. Carlow only put Laois under pressure on occasion, getting within four points early in the second half, but other than that it was plain sailing.

Perhaps because of that lack of pressure on them, or perhaps because of an early-evening midweek throw in time, Laois were sloppy. They coughed up possession far too easily at times, and could, and probably should, have won by much more than they did.

Without that pressure on them though, it looked like they never really came close to playing as well as they could, which might not be a bad thing. Playing your best football early in the championship is never ideal, but regardless of who they face next, they will have to improve dramatically.

They got off to an ideal start, as full-forward Diarmuid Whelan pointed a free in the opening minute. Whelan repeated the dose three minutes later as Laois doubled their lead, with Carlow's attacking play laboured and failing to really trouble Laois.

Whelan made it three in a row for him and Laois in the fifth minute, when he ran 40 yards with the ball before calmly tapping it over, as Laois quickly relaised they could run through the heart of the Carlow defence without meeting much resistance.

Alan Kinsella opened his account after that with a fine score from the left wing, before Laois' goal arrived. Showing good patience, the Laois forwards retained possession and moved the ball around the forward line looking for a good line of attack, and when it came, they pounced on it. John Kavanagh eventually set up Johnny Kelly, and he blasted to the net from close range for an excellent goal.

Carlow finally started to come into the game after that, with Ross McGrath forced to make a couple of good saves to keep them out. Ross Dunphy pointed for them but Laois responded with points from Adam Deering (45), James Kelly and Diarmuid Whelan to extend their lead to nine points.

Carlow were thrown a lifeline after that when Jordan Morrissey, a great-grandson of Laois legend Tommy Murphy, was fouled in the penalty area. Cathal Myers scored from the spot, and a Conor Crowly free left five in it at the break.

The less said about the second half, the better, as it was a poor thirty minutes of football. Carlow got within four but Laois steadily pulled away from them, kicking another six points before the final whistle to run out comfortable winners.