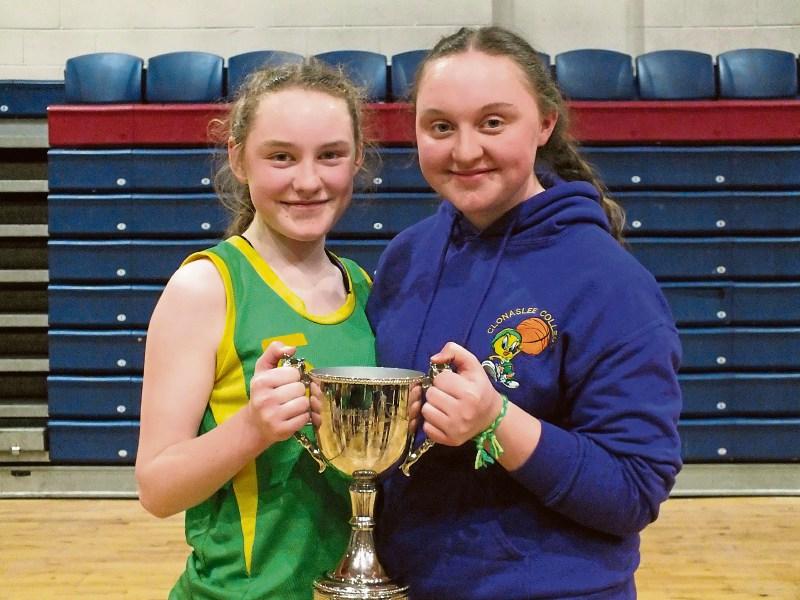 Clonaslee College fended off a remarkable come back from St. Enda’s Galway and won 34-30 to claim the All Ireland Minor B Basketball Final in Tallaght recently.

To reach the final they battled hard against a strong team from ISK Killorglin and won by a margin of three points. They fully deserved their progression to the final stage on a score-line of 26-23.

In what was a thrilling final against the Galway girls, Clonaslee dominated the opening quarter by keeping their opposition to just two baskets thanks to some tenacious defending. Olivia Rigney topped the score sheet in this quarter for the Clonaslee side, closely followed by Sarah Corbett, handing their side a 17-4 lead at the first break.

It wasn’t until the second quarter that the Galway girls showed their true potential. They outscored the Laois side by nine points, and gained a foothold in the contest by narrowing the gap to four (19-15). Clonaslee’s Rebecca Delaney opened her tally in this quarter, but scores in favour of the Laois girls were hard to come by. As the game progressed the St. Enda’s side grew stronger on offence and worked hard to restrict Clonaslee’s attacking opportunities.

There was little between the sides heading into the third quarter and both teams took to the court with an eye on the cup. It was a team effort by the Laois girls who worked tirelessly to track back and intercept Galway’s attack. Clonaslee pushed ahead in this period with accurate shooting and some excellent rebounding. However, the St. Enda’s side were hot on their heels throughout with some impressive scores of their own under the board.

In fourth and final quarter, both teams upped the ante to provide an exciting and nail-biting finish. St. Enda’s managed to push ahead by three points and take the lead for the first time in the contest.

However, the Clonaslee girls held their nerve thanks to the shouts of encouragement from their support on the day. The final few minutes was a basket for basket affair that demonstrated sheer determination from both sides.

With 40 seconds on the clock Clonaslee were on top by four, and with some smart and determined possession they were able to run the clock to come on top on a score-line of 34-30. Clonaslee College’s first years succeeded in making history by winning their first ever All Ireland B Basketball Title.