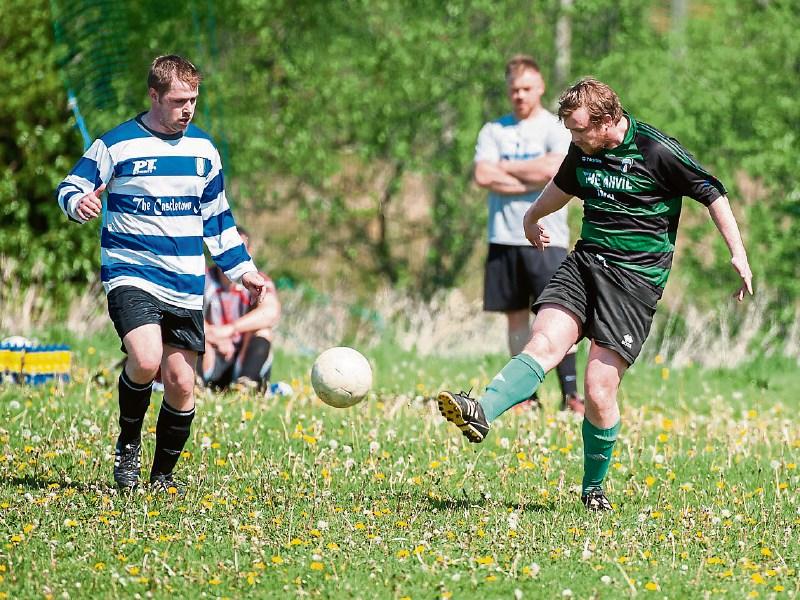 Portarlington Town sent themselves into Division 2 of the CCFL for next season after an easy 8-2 win on Wednesday night last in Ballinagar.

Evan Lyons put the Port men 1-0 up after 10 minutes with a neat finish after breaking through the Ballinagar defence and the lead was doubled five minutes later after Chris Floody finished from close range.

Pauric Duffy grabbed the first of his hat-trick soon after when he calmly finished after Sebastian Nochowicz put him through from the left hand side. Duffy scored his second when he was brought down in the area 10 minutes later but managed to get his shot off before the referee blew for a penalty and the advantage was played. Floody grabbed his second just before the break when he shot on the turn inside the Ballinagar penalty area.

With the 5-0 half time scoreline more or less promoting Portarlington Town, there was still to be five more goals. Duffy grabbed his hat-trick on the hour mark when again he was left one on one with the Ballinagar keeper and Stephen O'Leary made it 7-0 soon after with a close range effort with his left.

Ballinagar got one back soon after with a neat finish from the centre forward when a mistake in the Portarlington defence allowed him through on Kavanagh's goal before Sebastian Nochowicz scored the goal of the game with a perfect lob from 25 yards when presented with chance with five minutes remaining. Ballinagar grabbed a consolation goal in injury time with an expertly finished goal from their veteran striker but the game finished 8-2 and Portarlington Town will play their game sin the CCFL Division 2 next season.

The Port men played their last game of the season in Portarlington on Sunday morning which turned out to be a real dead rubber of a game. Noreside Celtic had already been crowned Division 3 champions while Portarlington Town couldn't have been caught for second place.

Noreside took the lead just at the halftime mark when Darren Finaly gave away a penalty after a superb GAA block on the Norsedie striker and they grabbed their second five minutes from the end when a direct free kick found its way by the Portarlington wall and passed Conor Kavanagh.

Portarlington Town would like to thank the Anvil Inn and Portarlington Credit Union  for their kind sponsorship this season. The Terriers will ply their trade in Division 2 next season and will have their awards day next Saturday after their annual Astro-Turf tournament at the Portarlington Leisure Centre next Saturday The awards will be presented in The Anvil Inn prior to the FA Cup Final.