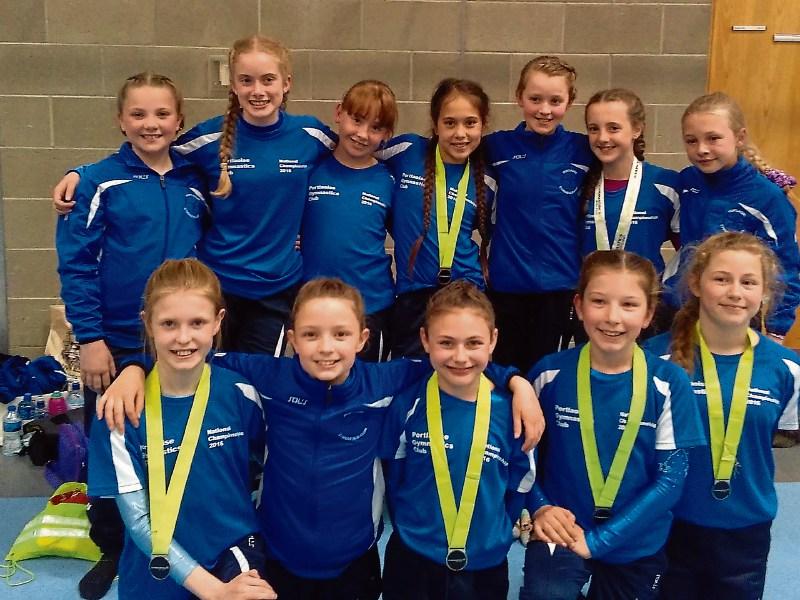 Over the past few weekends, gymnasts from Portlaoise gymnastics club have been busy competing in this year’s national championships which were held in University College Limerick.

In total 27 gymnasts competed on all apparatus. For the boys Nathan Flanagan, Luke Kenny Omen and Charlie Hackett flew the flag for the club with unbelievable success.

In the L1 O-10 U-12 competition Nathan won national gold on all six apparatus, floor, pommels, rings, vault, parallel bars and high bar and as a result also took the all around national gold medal.

In the girls competition, a total of 24 girls competed for the club. Competing in the L3 O-10 competition against 98 gymnasts from all over the country, Kayla Darcy took overall national gold medal, a fabulous achievement for the Portlaoise gymnast.

In L2 U-9 Rebecca Bambrick won regional gold medal. In L2 U-10 Jane Ridgeway finished a very commendable eighth nationally and won regional gold. In the same competition Emma Rouget won regional silver and Kiera Legg won regional bronze. Well done also to Saoirse O'Brien and Sophie Phelan who also competed at this level but were just outside the medals.

In L3 U-10 Kate O'Connell won regional gold. In L3 O-10 Kayla Darcy won National and regional gold, Niki Karasinska won regional silver as well as achieving highest score nationally on vault with an amazing 10.55 out of 11.00 and Anouska Dunne won regional bronze. Well done to Tara Armstrong who just finished outside the medals in this competition.

L4 U-13 Ellen Donoghue won regional gold and placed eighth nationally as well as achieving the highest score nationally on beam in her competition with a score of 11.50 out of 13.00. Joan Akaehomem won regional silver.

All the coaches would like to acknowledge all the hard work put in by the boys and girls every week and the huge progress the gymnasts have made throughout the year. A big thanks to the parents who helped out during the year and over the competition weekends.