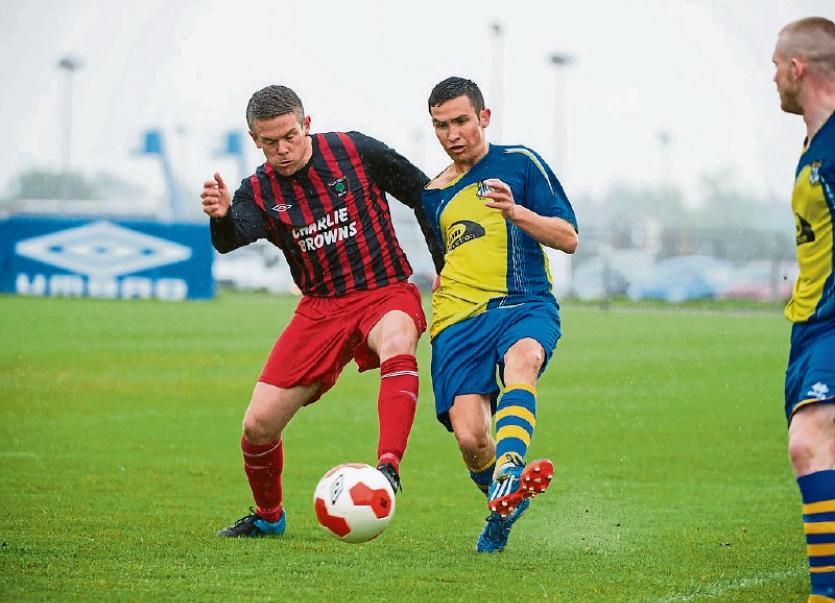 Luck was certainly not on Mountmellick's side on Saturday as they lost out to Willow Park in the CCFL Cup Final in a game played in torrential rain in the first-half and glorious sunshine in the second.

After going a goal behind early in the game, Mountmellick battled back to draw level before the break with Shane O'Connell scoring from the spot.

Willow Park got back in front on the hour mark but Mountmellick were still very much in the game and could count themselves unlucky not to have been level at that point. And their luck did not change for the better late in the game as first they were reduced to ten men when Robbie Hibbetts was somewhat unlucky to receive a second yellow card.

Even down to ten men, Mountmellick still went in search of an equaliser but their resolve was finally broken two minutes from time when Willow Park were awarded and converted a very soft penalty by the linesman after Mountmellick goalkeeper Eoin Keogh had clearly won the ball at the feet of Kevin Murray.

It was an unfortunate way for Mountmellick to finally lose a game in which they had been more than a match for their highly touted Athlone opponents.

Eddie Melia was superb at the heart of the defence making several important interceptions and blocks while Gary Donagher bossed the midfield area. The pace of Davis Pedro was a constant threat up front while captain Shane O'Connell was always a willing runner on the left wing.

After torrential rain that preceded the game eased to a downpour, the ball zipped across the immaculate surface in Tullamore allowing for some excellent football from both sides.

Willow Park settled much quicker and came close twice in the opening five minutes. Mountmellick eventually found their feet and began to play their way into the game. Davis Pedro twice went close before a shot from Mark Glennon shaved the outside of the post.

However, against the run of play, Willow Park took the lead when a brilliant curling shot from Bennie McGuinness nestled in the top corner of the net.

With the rain still falling, Mountmellick were quickly back on terms. The pace of Pedro got him behind the Willow Park defence and he was clipped in the area. Shane O'Connell calmly stepped up and slotted the penalty home. The captain almost put his side in front soon after but this effort went just wide and it remained 1-1 at the break.

During the interval, the rain subsided and the sunshine broke through the cover of the dark clouds. Willow Park again started brighter and it took two brilliant interventions from Eddie Melia, including one perfectly timed last ditch tackle, to keep the scores level.

At the other end Davis Pedro again got behind the Willow Park defence but his well struck shot was expertly palmed away by Aiden Browne.

On the hour mark, Willow Park got back in front. A dangerous ball across from right was again cut out by Melia but this time it fell kindly for Bennie McGuinness who slotted home his second goal.

Mountmellick went back on the attack in search of an equaliser with Davis Pedro and Mark Glennon both going close. Gleenon's effort came at the end of a brilliant run from Robbie Hibbitts but with ten minutes to go, the experienced full back was sent off after picking up a somewhat harsh second yellow card.

Undeterred, Mountmellick pressed forward but they couldn't manufacture an equaliser while at the other end Eoin Keogh was in excellent form, twice making fine saves.

He made another in the final minute when he sprinted from his line to flick the ball off the toe of Kevin Murray but the linesman inexplicably flagged for a penalty and once Robbie Shine converted from 12 yards, it was game over.

Mountmellick continued to press but the clock, decisions and the numbers were against them as Willow Park held to claim the CCFL's top cup.