Second half goals offer some hope for Laois 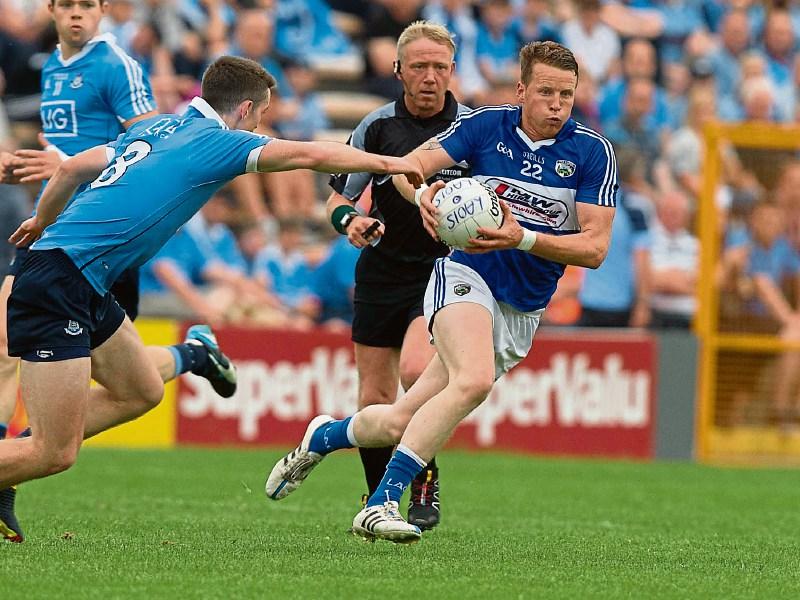 In the end, it proved to be the outcome we all expected, but the performance at least sent a few Laois fans home with a smile.

A spirited second-half performance was the highlight of an otherwise forgettable evening in Kilkenny, as Dublin marched into the Leinster semi-finals.

The reigning All-Ireland champions were expected to obliterate Laois, and two goals in the opening five minutes, including one after just 15 seconds, pointed to a side keen to live up to expectations.

They duly cruised to half time, 2-12 to 0-7 to the good and Laois reduced to 14 men, with John O'Loughlin having been sent off.

At that stage, when it looked like Dublin were going to streak off into the sunset, something seemed to stir in the Laois team. They closed ranks at the back, started to repel Dublin attacks instead of ignoring them, and then hit two goals in five minutes to stun just about everyone in attendance.

For a brief moment it looked like they could reel in their much vaunted opponents, but Dublin snapped back to life and go back to the business of kicking points. It didn't matter by then though. Having come into the game with the lowest of expectations, leaving the ground having felt moments of pride and hope, however fleeting, was as much as anyone in blue and white would have been expecting. Laois' brief revival will no doubt be put in the context of Dublin's sizeable lead at the time, but Laois still had to put in the work to get the scores.

They could have easily abandoned any pretence of ambition and sat back and taken their beating, but they at least showed they wanted more from the game than that.

It is something small to take from the game and try to build on, but the real key now is try and keep the team together. With Laois' recent record in the Qualifiers and the lack of silverware to play for, there will no doubt be a temptation to head Stateside for a few players, but hopefully they all hang around.

Laois have lost to Division 4 sides in the last two years in the Qualifiers, and that, coupled with a poor season to date, will surely have enough of the squad wanting to take something positive from this season.

There weren't many positives to take from the first half, unfortunately, as Dublin's predicted onslaught started within seconds of the throw in. In their first attack, the ball was worked to Dean Rock on the endline, and he cut back inside before placing a shot beyond Graham Brody with just 15 seconds gone.

Laois were understandably rattled by that, but hit back in the fourth minute with a point from Gary Walsh. From the resulting kick-out, however, Dublin got their second goal. James McCarthy was left all alone to field a Cluxton's kick, and he worked the ball to Diarmuid Connolly, who waltzed through to slot home their second goal.

Dean Rock (2) and Ciaran Kilkenny added points soon after as Dublin lead by nine points after ten minutes, and Laois' interest in the game appeared to be over. Donie Kingston, Paul Cahillane and John O'Loughlin replied for Laois, but Dublin were utterly dominant.

Rock was finding space with alarming ease, and when John O'Loughlin was shown a straight red card for retaliating to Michael Dara McAuley, the thoughts of a record defeat sprung to mind.

The handicap betting before the game was 14 points, and that went out to 23 at the interval. With Dublin hitting the first two points after the restart they looked like exceeding that, but Laois showed there was a defiant streak in them after that.

The marauding Damien O'Connor was tackled to the ground in the penalty area by JOhnny Cooper, with the Dublin man somehow escaping with just a yellow card. Paul Cahillane stepped up to take the spot kick, and calmly rifled his shot into the top corner of Stephen Cluxton's net.

Five minutes later, a rapid Laois counter-attack ended with Stephen Attride being put through on goal, and he unleashed a rasping shot which evaded Cluxton and dipped below the crossbar for a truly brilliant goal.

Ross Munnelly was summoned from the bench after that and his first act was to take a pass from Donie Kingston and curl over a point, as Laois cut a 13 point deficit down to just six.

Dublin didn't become the most lauded team in recent years by panicking, and they duly got back to work, with Diarmuid Connolly quelling any hopes of a Laois uprising with two pointed in the space of a minute.

Those scores deflated Laois, and when Dean Rock added three more, Dublin were back in cruise control while Laois continued to fight with everything they had to narrow the gap.

They managed to break even with Dublin in the second half - 2-3 to 0-9 - and they had Graham Brody to thank for that, as he made a brilliant penalty save to deny Diarmuid Connolly in the 67th minute. It was the least Laois deserved, but it's off to the Qualifers now, as they now await the draw.