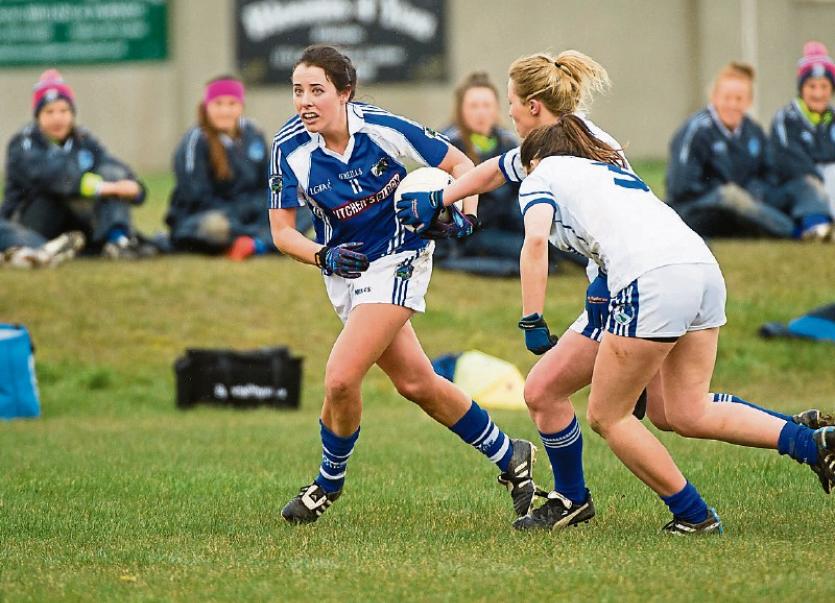 Laois travelled to Portmarnock to take on last year's All-Ireland finalists Dublin in the first round of the Leinster championship.

This was never going to be an easy game but considering new additions to the team and that training was going well, Laois were quietly confident ahead of the encounter.

Credit to Laois, they performed well in the first half, keeping the current Leinster champions to 0-8. Laois played very defensive with captain Aileen O'Loughlin playing sweeper and the wing forwards dropping back to defend.

This meant that when Laois overturned a Dublin attack nothing would come out of it, because there were only two girls in the forward line. Ciamh Dollard put in two top class saves in the opening period and the Laois backs put enormous pressure on the Dublin forwards to ensure they kicked from long range.

When Laois were on the attack they posed a threat and their first score was a fine example of team work that should have been replicated during the game. Maggie Murphy caught the Dublin kick out, drove the ball up the field into Caoimhe Simms, Simms turned and ran towards goal where she was fouled and Noirin Kirwan popped the resulting free over the bar.

The Dublin sides support play, fitness and work ethic were phenomenal and they hit some excellent scores in the opening half through Sinead Aherne (4), Lyndsey Davey (2), Nicole Owens and Sinead Goldrick. It was a physical first half and the experience of Dublin, whose fouls were less obvious than Laois, saw Laois full back Jane Moore pick up a yellow card and, consequently, sin binned on the half hour mark.

With the backline exposed, Ciamh Dollard produced a super save to deny Dublin captain Lyndsey Davey; Dublin lead 0-8 to 0-1 at the break.

Laois needed an early goal in the second half if they were to have a fighting chance in the game but it was Dublin who increased their tenacity. Laois failed to move the ball as quick as their opponents and their attacks were overturned because of this.

Laois suffered a blow when Amy Loughman was sin-binned with 44 minutes on the clock, and Dublin took advantage of the extra player, hitting four points through Davey (3), Siobhan Woods and a goal by Davey. Noirin Kirwan converted a free for Laois after good play by Jane Moore and Laura Nerney. Aine Haberlin and Joyce Dunne then combined to set Deirdre O’ Shea with a point.

As the game came to a close, tiredness kicked in for Laois which Dublin capitalised on. Substitute Ciara Ruddy hit two goals in as many minutes while Alice Malone pointed a consolation score for Laois.

Speaking after the game, Laois manager Kevin Doogue understandably, had little to say. “We were completely blown away by Dublin’s fitness and work rate. We are always saying it but they’ve been training for three months longer than us – we just can’t expect to be able to compete. I’m happy with some of our performances today, when we were attacking we looked threatening it’s just unfortunate that there wasn’t a lot of attacks”.

When Laois played Dublin last year in Timahoe the game was a lot closer and, had chances gone in their favour, Laois could have won. Since that game Laois have had more people join the panel and there has been a lot of effort put into the senior team which was lacking in previous years.

The result today was disappointing because despite the great efforts being put in off the field, this is not being translated on the field. Up next for Laois is a home game versus Meath next Sunday, venue TBC.