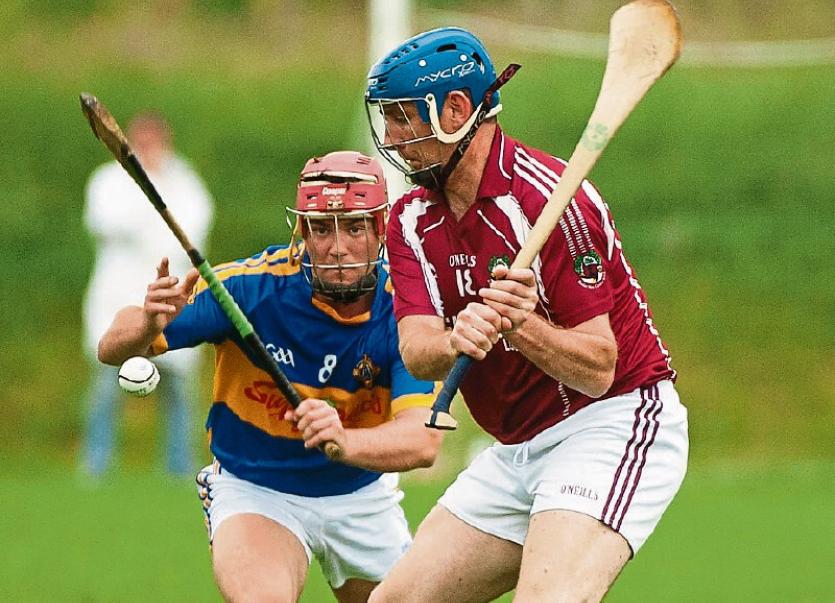 Ballinakill claimed an unlikely result in Ballacolla on Friday evening as they ran out three point victors over the home side, in no small part to Cha Dwyer’s outstanding contribution of 3-10 on the day.

Ballinakill looked to the scoring prowess of the Laois star, for nineteen of their twenty-seven point total on Friday evening with the Ballinikaill man proving unmarkable from open play as well as contributing 2-6 from placed balls in what was a near flawless display from the young forward.

It was the standout performer of the day that opened the scoring with just a minute on the clock as Dwyer split the posts with his first attempt of the day. Clough-Ballacolla replied in devastating fashion as they bagged 1-2 in three minutes as they began to dictate the tempo. Picky Maher and Willie Hyland provided their opening two points, before Ballinakill conceded an unfortunate own-goal as David Phelan knocked the ball into his own net to see Ballacolla take an early form point lead.

Ballinakill cut the deficit in half thanks to a brace from Dwyer, before Hyland (3) exchanged points with Ballinakill’s Brian O’Mara, Barry Dunne and Dwyer to leave the home side ahead by two points with seventeen minutes played.

Having already claimed a fortunate goal ten minutes previously, Clough-Ballacolla were again dealt a fortunate break as a mix-up between James Walsh and his goalkeeper Paul Simms gifted Willie Dunphy a simple tap in for the second goal of the day.

Ballinakill wasted no time in setting the record straight as Cha Dwyer rifled a low free into the Ballacolla net from the resulting puck out to cut the margin to two points.

Ballinakill found their stride as they rattled off 2-3 in final ten minutes of the half - while also keeping Clough-Ballacolla scoreless. Dwyer hauled 1-2, while corner-forward Damien Carter also emerged with 1-1 as Ballinakill went in seven points clear at the interval.

Ballinakill picked up where they left off upon the restart with Dwyer claiming 1-1 from frees in the opening two minutes, while Carter fired a single as they stormed twelve points clear with almost the entire second half left to play.

Clough-Ballacolla dug deep and tacked 1-4 in the ten minutes thereafter through Willie Dunphy’s 1-1 and Willie Hyland’s three points on the trot to bring them to within five points with a quarter of an hour left to play.

Ballinakill halted the Ballacolla revival with a point apiece from Dwyer and Carter steadying the ship for the Ballinakill men.

Ballacolla rallied in the final minutes of the game and emerged with 1-2 as Picky Maher’s shot was deemed to have crossed the goal-line, while Hyland claimed the brace. Sandwiched in between the Ballacolla goal and points, Cha Dwyer slotted Ballinakill’s final point of the day from a free to bring his personal haul to a remarkable 3-10 in sixty minutes of hurling as Ballinakill crossed the finish line three points clear.