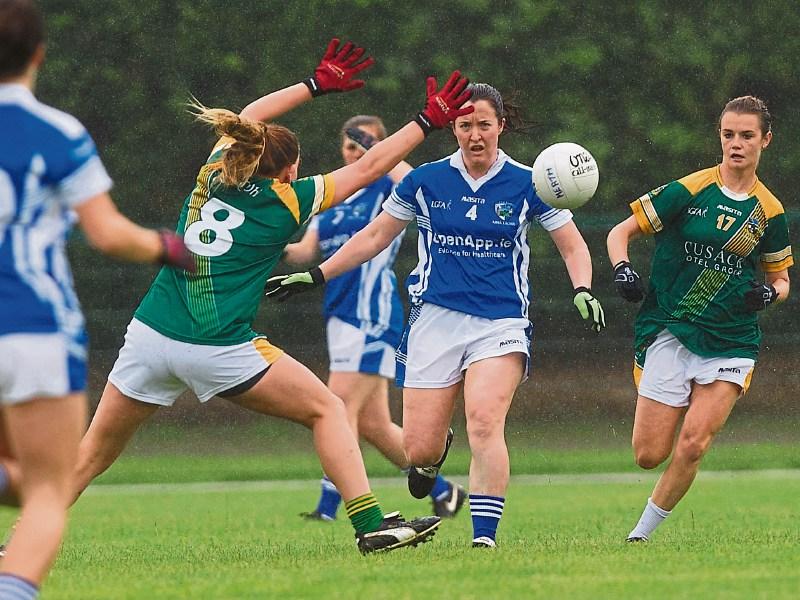 Laois welcomed Meath to Stradbally on Sunday in this Leinster SFC Round 2 clash, and in a nail biting finish, they overturned an eight point deficit with six minutes of normal time remaining to claim a draw.

The conditions were far from ideal, with a strong cross-field wind and constant rain which made playing difficult. It was Laois who were first off the mark with Grainne Dunne intercepting a Meath attack, and wing back Aine Haberlin pointing from 30 yards.

Laois were defending loosely and Meath hit four points without reply, as Meath were finding their players a lot easier than Laois. In the 11th minute Laois were offered a lifeline when Caoimhe Simms was fouled in the square. A penalty was awarded which captain Aileen O Loughlin drilled down the centre to bring the sides level.

Laois should have pushed on from this but it was Meath who were on the attack next, and two points on the trot from the visitors saw them regain their lead. Laois pointed through Aileen O'Loughlin but Meath finished the half strongly with a point to leave the half time score 0-7 to 1-2 in favour of the visitors.

Laois hit eight wides in the first half compared to three by Meath as the skilful Meath defending forced Laois to shoot from long range.

Laois wasted no time after the throw in to bring the sides level with points from Aileen O'Loughlin and Laura Nerney. This was a good period of play by Laois, they broke down the Meath attack and made good use of the ball.

Meath went a point ahead with a converted free by Niamh O'Sullivan. With forty minutes on the clock, Meath's Shauna Ennis carried the ball down the middle of the pitch and played a one-two before sending the ball to the back of the net. O'Sullivan followed this up with a point from a free as Laois struggled with the fast, direct play of the Royals.

Meath utilised their give-and-go tactic once again with Jenny Rispin working the ball up the field and passing it to Vikki Wall who scored Meath's second goal of the day. With ten minutes remaining good play by Alice Malone saw Aileen O'Loughlin score her third point of the afternoon.

The ball was tossed between the two sides until Aileen O'Loughlin bagged her fourth point of the match. O'Loughlin continued her scoring streak by getting past two defenders and firing the ball in the back of the net from a difficult angle. This was a major turning point for the Laois side and Meath remained unresponsive.

In the fifth minute of overtime Caoimhe Simms received the ball from Aileen O'Loughlin and weaved through the defence to score a cracking goal. Laois missed opportunities to lead due to bad passing and conceded a free in the 67th minute, kicked by Niamh O'Sullivan.

Her shot dropped short into the hands of Niamh Gallogly who was unfortunate when her shot for goal hit off both posts and was picked up by Laois goalie, Ciamh Dollard who cleared it to the sound of the final whistle.

Laois are out next Sunday in the last match in the round robin versus Westmeath in Timahoe at 3pm.