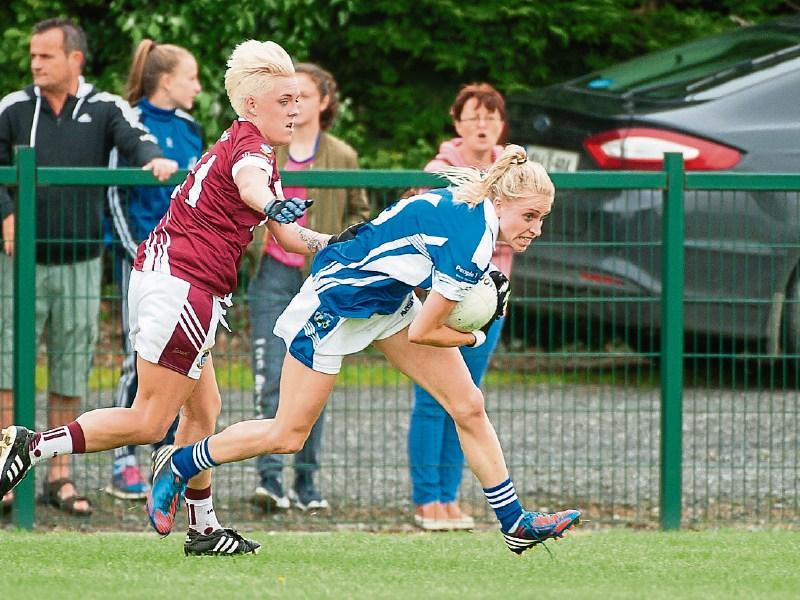 Laois put in a tremendous performance against last year's Leinster finalists Westmeath in Timahoe on Sunday afternoon, but it wasn't enough to claim a first championship win of the year.

The rain held off for the first half, and it was Westmeath who got off to a better start with an early point from Fiona Claffey. A poor showing for a Laois kick-out saw Leona Archibold raise the green flag with three minutes on the clock, as Westmeath hit the front early.

Noirin Kirwan opened the Laois scoring with a point from a free, but this was quickly overturned by Westmeath as Archibold added a point. Laois were playing into a very strong breeze and found it difficult to get the ball into the forwards.

Kirwan added her second free of the day but Laois were on the back foot almost immediately as Fiona Coyle ran through the centre and popped it over the bar. A slip-up in the Laois defence soon after that saw Maude Ann Foley send the ball into the back of the net, as Westmeath were dominant. Leona Archibold added a free to leave her side 2-4 to 0-2 ahead with 15 minutes played.

Laois found their feet after that however, and played excellent football for the remainder of the half. Sisters Anna and Jane Moore combined to see Maggie Murphy split the posts in what was a very good team score. Caoimhe Simms was on hand to set Deirdre O'Shea up for a super point, with Laois starting to show what they could do.

Laois were playing good football with solid support play and their efforts were rewarded when Deirdre O'Shea and Laura Nerney set up Noirin Kirwan for a cracking goal which she slipped to the right of the Westmeath 'keeper. Laois suffered a blow after this when Laura Nerney was carried off after picking up an injury.

Westmeath ended the half with a point each from Laura Walsh and Karen Hegarty to leave 2-6 to 1-4 between the sides at the break.

Westmeath were quick off the mark in the second half, hitting four points without reply. Laois waited until the 39th minute to open their account for the half, with a point from Noirin Kirwan doing the job.

This was a good period of play by Laois and they scored 0-4 from Noirin Kirwan to close the gap. Two points from Archibold kept Westmeath's noses in front but Laois continued to attack. Laois had a great chance of a goal but Aoife Kirrane's shot hit the upright, as the frame of the goal thwarted Laois once again. A point from Noirin Kirwan from a free put 1-1 between the sides but they ran out of time.

This loss means that Laois don't qualify for the Leinster final. This was the best Laois performance of the year and by tweaking a few players first touch, Laois could do very well in the qualifiers.