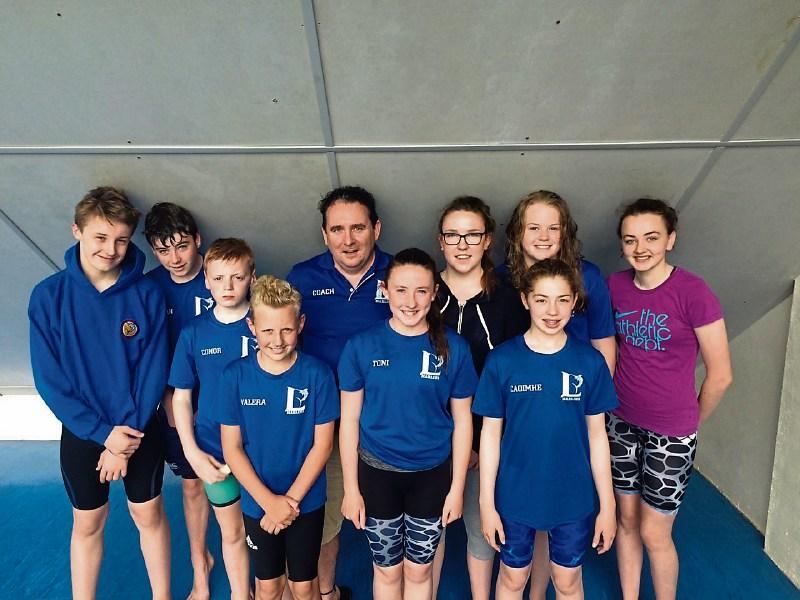 A total of 14 swimmers travelled to the National Aquatic Centre in Blanchardstown to partake in the Leinster Irish Age Groups (IAG) Division 1 Championships 2016.

There were over 500 swimmers represented from 46 swim clubs from the Leinster province all hoping to reach their potential of gaining great Personal Best Times (PBS). This is the biggest ever number of Marlin swimmers to compete for the club at a top tier provincial event.

There were a total of 46 swims and two medals were won by Christopher Carew a gold and a silver in the 100m and 200m breast stroke. Jordan Overton also qualified but unfortunately had to pull out due to a devastating injury on the eve of the competition.

Eight of the swimmers finished in the top 20 and eight of them finished in the top 30. There were 15 PBs achieved on the day and these were credit to Christopher Carew, Sean Donoghue, Conor and Zara McMahon, Christian Kenny- Carroll, Jack Rouget, Caoimhe Moore, Cian Nugent and Valera Zaharovs.

Zara McMahon has recently just come back from injury and managed a respectable three PBs and two top 30 places. Zara's brother Conor did amazing too, saying this was his first time to swim in a 50m pool he made the top 10 in all of his swims. Valera Zaharovs made the top 10 in his 200m back stroke and knocked 3.13 secs off his entry time and Tyler Dolan did two swims and made the final in both of these events.

Sinead Ni Chuinn and Christian Kenny-Carroll both had really good swims in their 200m breast stroke and Christian managed to knock a massive 12.13 seconds of his entry time and Sinead 1.42 secs off hers. Jack Rouget made PBs in both his 100m free and 100m back stroke and Ryan Flynn also swam well on the day and maintained his entry times.

He went into the competition as number one seed and maintained that position throughout the Preliminaries and the Finals. The 16 year old was delighted to take his first ever age-groups Provincial title.

Earlier this year he won the Senior Schools Leinster title for 100 breast stroke and represented the province at the Interpros. He also went on to win the Silver medal in the 200m breast stroke final, having gone into the competition as fifth the seed.

Credit has to be given to all these swimmers on the day in what proved to be a very hot and humid conditioned competition where nutrition and hydration were very important on the day for the swimmers to achieve their goals.

A team of seven swimmers travelled to Wexford Swimming Pool for the Small Fry Gala which focuses on swimmers under the age of 12 years of age.

A total of 29 swims were covered by the Marlin swimmers and they didn't disappoint. The swimmers were Sadhbh Moore, James McDonald, Conor McMahon, Valera Zaharovs, Gary Young O'Shea and Daniela Ryan.

Bronze medals were won by Sadhbh Moore in 50m back stroke, Gary Young O'Shea in the 100m freestyle, Daniela Ryan in 50m butterfly, James McDonald and Valera Zaharovs in the 50m freestyle and Gary in the 100m Individual Medley. The four boys - James, Conor, Gary and Valera - made up the relay team and won silver in the freestyle and medley relays.

Conor McMahon had an absolutely magnificent day and was awarded the overall swimmer of the day and awarded an individual award for this. Conor and his sister Zara will be moving to Limerick in the summer and Laois Marlins would like to wish them all the best with their new club and every success.

I am sure we will hear great news for both swimmers for the future and it has been a privilege to have them both in our club.

This Gala gives swimmers their last chance to achieve their best times for the end of the season before the Division 1 and Division 2 Irish Age Groups.

Four swimmers will represent Laois Marlins at the IAG Div 1 Championships this year and they are Sinead Ni Chuinn, Jack Rouget, Ryan Flynn and Nicole Turner. Best of luck to all these swimmers and congratulations from all the club for representing them at this high level in swimming. Christopher Carew and Jordan Overton both qualified but will not be competing this time, Christopher is away and Jordan is injured.

Laois Marlins would like to wish the following swimmers, Jacob Bickerdike, Toni Dolan, Tyler Dolan, Sean Donoghue, Shauna Dunne, Christian Kenny-Carroll, Conor McMahon, Zara McMahon and Caoimhe Moore the very best of luck as they will be representing the club at the IAG Div 2 2016 Championships. A huge congratulations for qualifying.