Football All-Ireland SFC Qualifiers Round 2A 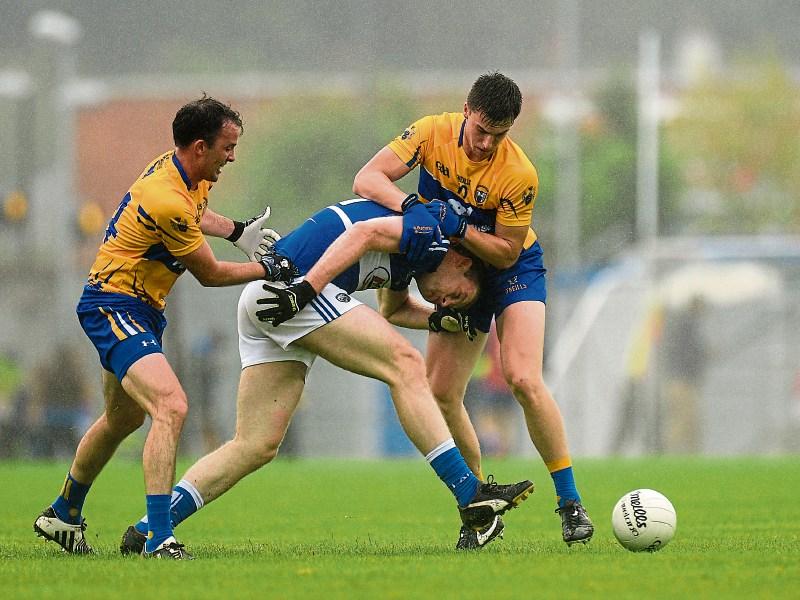 Laois were knocked out of the All-Ireland SFC after a disappointing day in Ennis saw Mick Lillis’ men fall to a one-point defeat against Clare.

Just like the hurlers the previous week, Cusack Park was the venue as Laois were eliminated from the championship in this round 2A clash.

The confusion which caused the Armagh tie to be replayed meant that it was a third outing in quick succession in the qualifiers for Laois, who ran out of legs late on as Clare finished much stronger to progress to the next round.

However, having beaten Clare in three previous qualifiers in 2001, 2002 and 2013, the Midlands county would have been confident as they travelled south after beating Armagh in the previous round.

They looked like making it a fourth win over the Banner County in the back door when Stephen Attride goaled in the 29th minute. Apart from the wing back's emphatic finish, Laois’ shot selection was poor as they hit bad wides and dropped a number of balls short into the hands of the Clare goalkeeper.

Laois led by Attride’s goal at the break as they took a 1-7 to 0-7 lead into the dressing room.

In truth, they should have led by more as they kicked five wides in the opening period, to Clare’s two. Attride’s goal came after Donie Kinston provided the lay-off for the Killeshin man who blasted the ball past Joe Hayes.

It wasn’t until the 10th minute that Clare registered their first score – Eoin Cleary pointing a free after he was fouled 21 yards out from goal.

Clare enjoyed a good spell after this score but couldn’t edge in front. With the scores level at 0-3 each, the visitors had a purple patch with scores from Conor Meredith, David Conway and Darren Strong.

Clare however, fought back and managed three in a row themselves – a Cleary free ending 14 minutes without a score before Jamie Malone and the impressive Keelan Sexton levelled the match.

However, just seconds after Sexton’s white flag, Donie Kingston got possession and set up the games opening goal. The Arles-Killeen clubman set up Stephen Attride who made no mistake with the finish. Both sides traded points as the half drew to a close, meaning Mick Lillis’ side enjoyed a three point interval lead.

The second half was played in torrential rain, making it difficult for both sides to get a foothold. Scoring was tough and the sides only managed one point each in the 10 minutes after the break.

Two points in quick succession from Paul Cahillane and Donie Kingston had the Midlands county four points up (1-10 to 0-9) with 20 minutes to play. However, Mick Lillis’ side failed to score after Kingston’s 51st minute effort as Clare hit five points in a row to secure their first win over Laois in their fourth meeting in the qualifiers.

After beating Clare by 16 points three years ago, Laois will be disappointed with this reversal against the Munster opposition.

Defeat means an abrupt end to a poor year for Laois football after the side suffered relegation to Division 3 of the National Football League in the spring.

Shane McGrath was the hero in the end for Clare as his 70th minute point edged them ahead for the first time in the match.

There was five minutes added on by referee Marty Duffy but Laois failed to get a levelling score and must now reflect on the year gone before dusting themselves off and getting ready to again next season.