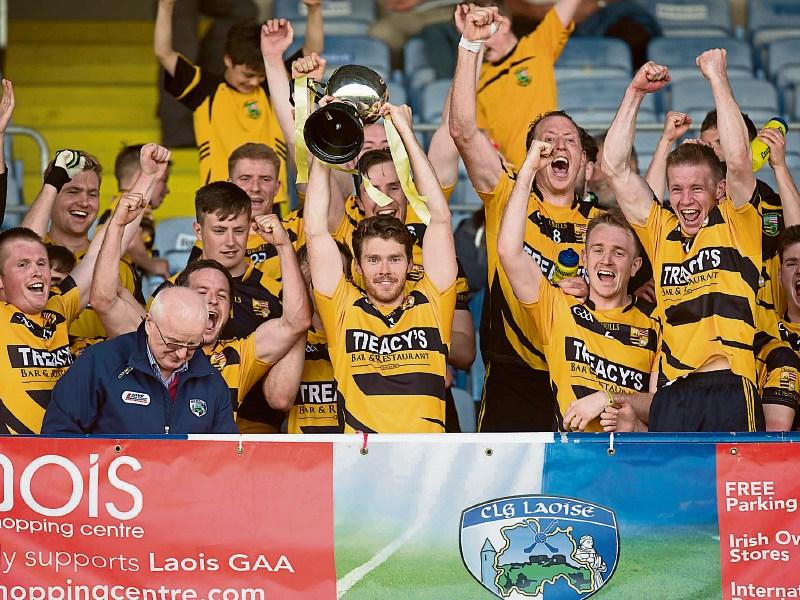 The Heath won their first ACFL Division 1 title since 1976 on Saturday evening, as they proved far too strong for St Joseph's in O'Moore Park.

Despite having the better of the play in the first half they lead by just three points at the interval, 0-6 to 0-3, but stepped things up a gear after the break. Goals from Evin Keane and Daithi Carroll saw them put plenty of daylight between themselves and St Joseph's, who never really looked like catching them after that.

The Kellyville side will no doubt look back with disappointment at their performance here, as they never really played to their potential, but they never had the chance either. The Heath worked harder, ran harder and tackled harder, and eventually swamped St Joseph's out of the game. It was evident in the number of times St Joseph's players were blocked down, as The Heath worked hard to put them under pressure.

It is a timely fillip for The Heath too, and considering they won the Division 2 title just two years ago, they have improved steadily in last few years. They can go on to the championship now full of confidence, and they will need all of it, as a date with nine-in-a-row champions Portlaoise awaits.

They got off to a bright start, and were ahead with less than two minutes on the clock, as a lovely ball over the top from Seamus Mulhare found Daithi Carroll, and he jinked himself into some space before curling the ball over the bar.

St Joseph's looked sluggish early on and were made to pay, as Evin Keane caught their defence napping when he took a quick free from Chris Bergin and pointed from 25 yards. Moments later Keane was on the scoreboard again when he pointed off his left after being set up by Padraig Whelan, with The Heath now three clear.

Their cause was boosted even more after that when a late foul on Evin Keane by Adam Campion saw him shown a black card, with Chris Bergin tapping over the free. St Joseph's day went from bad to worse then, as Matthew Campion was black carded four minutes later, again for a late tackle, this time on Mark Dowling.

The Kellyville side were struggling in all facets of their game by now, and The Heath surged further ahead, as JP Nerney pointed from play and Chris Bergin added a free. They were now six points clear and in total control, but St Joseph's finally shook off whatever malaise had taken hold of them to get into the game in the run up to half time.

Jason Campion intercepted a short kick out to set up James Doyle for a point, and Joseph's again won possession from the next kick out, with Michael Keogh adding their second point.

Those scores seemed to give them a injection of confidence, and they added another score before the break thanks to a Dan Dunne free. That left The Heath 0-6 to 0-3 ahead at the interval, a small lead given how much they had dominated the half overall.

The second half started on a more even keel, with The Heath hitting the first score through Chris Bergin, only for Dan Dunne to cancel it out with a long range free. The side's exchanged points again after that, Chris Bergin (free) and Jason Campion on target, before The Heath took control.

An intricate series of passes ended with Chris Bergin playing in Daithi Carroll, and he squared to Evin Keane 10 yards out, who made no mistake with a low finish.

That put The Heath six clear, and Keane quickly extended it with a point off his left foot. St Joseph's were reeling now, and sensing the game was there to be won, they sought to land a knock out blow. Again it came from a well-worked team move, as Denis Booth, Tony Connolly and Evin Keane were involved in the build up, with Keane setting up Daithi Carroll for a tap-in goal.

There was no was back from St Joseph's from there, as The Heath were at their ease to the end.