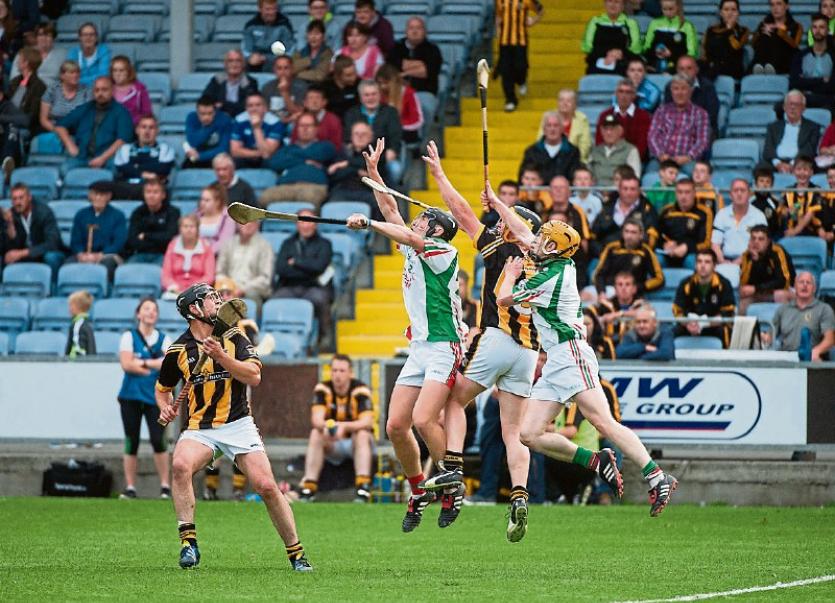 Two spectacular points in injury-time from Zane Keenan, one from a free on his own '45, the second out of the hand from inside his own '65, guided Camross to victory in the opening game of this year's championship on Friday in O'Moore Park.

On a perfect evening for hurling, it was a game that swung one way and then the other with Camross the side with their noses in front when the final whistle went.

Having made a blistering start where they opened up a 1-5 to 0-1 lead after 12 minutes, Camross

were pegged back by a determined Rathdowney-Errill side who twice scored four points unanswered as they hauled themselves back into the game led by the expert marksmanship of Ross King.

Rathdowney-Errill, who have won the championship in every even numbered year all the way back to 2006, got ahead for the first time in the game with three minutes to go and looked primed to get over the line with the momentum on their side.

However that was before Zane Keenan intervened with his two superb late points to snatch victory for Camross.

It was an entertaining hour of hurling although both teams will be looking to improve before their next outings. While there was some impressive long range points, both sides also were well into double digits with wides with a number of shots also dropping short.

Much of the game lacked the intensity you would expect from the opening game of the championship although the action certainly heated up with the game on the line.

Overall Camross will be happy to have gotten out with the win while Rathdowney-Errill will take positives from how they came back after letting their opponents take an early seven point lead.

Camross hit the ground sprinting with Zane Keenan, Tomas Burke and Darrell Dooley all pointing within the first three minutes. After Ross King had pulled one back for Rathdowney-Errill, Dooley launched over another long range point to put Camross three clear.

Zane Keenan outdid Dooley's long range efforts with a sideline cut from all of 60 metres under the shadow of the stands before he smashed home a penalty after he was fouled to leave his side 1-5 to 0-1 clear after 12 minutes.

Dwane Palmer and Damien Keenan from distance steadied Camross but Ross King hit the last three points of the half to leave his side just two adrift at the break.

Keenan and King continued their scoring exploits early in the second-half as the sides exchanged the first six points of the second-half. Keenan hit all three for Camross with King hitting two for Rathdowney-Errill and John Purcell the third.

Eric Killeen reduced the deficit to one before Dwane Palmer and Andrew Collier scored midway through the half to put Camross three in front again.

Both sides struggled for scores in the next period but with ten minutes to go, Rathdowney-Errill found their range and Jack Kelly, Ross King, from a free, Tadgh Dowling from a sideline and James Ryan all found the target to get to put their side in front for the first time with three minutes remaining.

With the momentum on their side, Rathdowney-Errill would have fancied their chances of getting over the line but that was before Zane Keenan intervened with his two monster points and, for good measure, a clearance from his own full-back line.