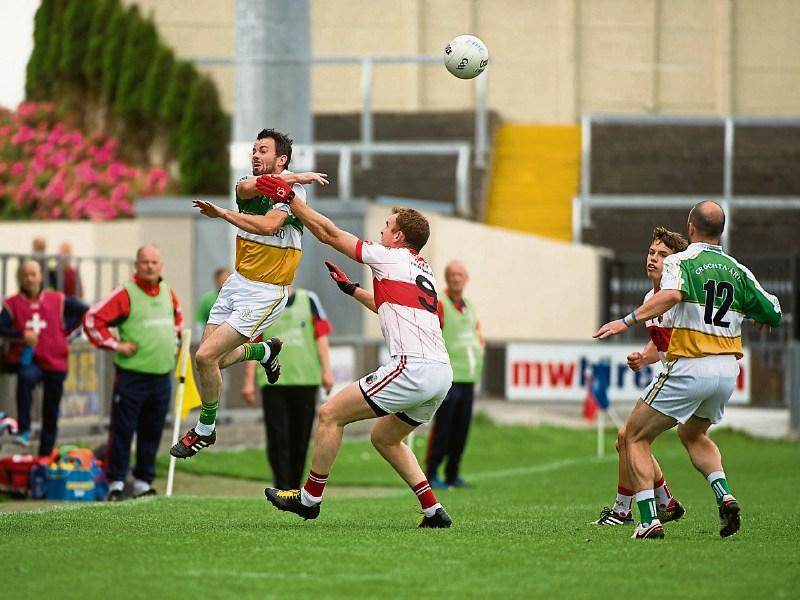 Cormac Murphy's free one minute into injury time proved to the winner in a closely fought encounter. There was never more than a score between the teams, and remarkably, they were level on 12 different occasions.

The first half was a classic example of two teams going score-for-scrore, with neither side able to create a lead of more than one point.

Cormac Murphy opened the scoring for Crettyard Gaels with a little over two minutes played when he floated over a free, but Emo were soon back level. A long ball to Paul Lawlor saw the Emo full-forward pluck it from the air and swing his trusty left boot at the ball to send it sailing between the posts.

Lawlor then added a free five minutes later to give Emo the lead for the first time, but in a recurring trend from the first half, the lead didn't last too long. Cormac Murphy nailed his second free of the game to get Crettyard level at 0-2 each, but Paul Lawlor had Emo ahead again soon. His initial shot was blocked by Sean O'Shea, but Lawlor shimmied himself into some space and pointed off his right.

Cha Dwyer, who was getting on a lot of ball for Crettyard Gaels, then set up Cristóir Maher for the equalizer, but Johnny Booth quickly had Emo back in front.

It was impossible for either side to build up any momentum, and Crettyard levelled the game for the fourth time when, after a well-worked move, Cristóir Maher got his second point of the game.

Willie Fitzpatrick put Crettyard ahead, but two points frees, from Evan Costello and Paul Lawlor, saw the initiative swing inevitably back to Emo.

Cormac Murphy soon wiped out that slender advantage with a free from the right wing, as the sides were level for the sixth time, but Emo managed to secure a narrow advantage at the interval. Nigel Murphy burst free from a couple of challengers to point from 25 yards, and his side headed to the dressing rooms 0-7 to 0-6 to the good.

The tit-for-tat nature of the scoring continued after half time, as Crettyard quickly drew level thanks to Cha Dwyer. Cormac Murphy then continued his reliability from placed balls with another free, and Crettyard lead once more.

Emo replied with three points in a row, the most consistent run either side managed in the game, to take a two point lead. It looked like they might be about to pull away, but Crettyard dug in and two more points from Cormac Murphy had them level at 0-11 each with 15 minutes to go.

The teams continued to go point for point after that, and when sub Paul Simms put Crettyard ahead with three minutes to go they looked like they were about to sneak it. In the final minute of normal time, however, a superb left-footed point from Darren Strong levelled the game, and with two minutes of added time to come, it was almost a case of 'next score wins'.

Crettyard struck first, when Sean Downey was fouled 20 yards from goal and Murphy slotted over the free, and Emo had just one minute to find an equalizer.

In a madcap finish to the game, a lofted ball into the Crettyard penalty area was swarmed by the Crettyard defence, while at the other end, and off the ball incident resulted in Niall Wheeler being red-carded.

When all settled back down, Emo couldn't muster a score, and Crettyard Gaels held on for a famous win.