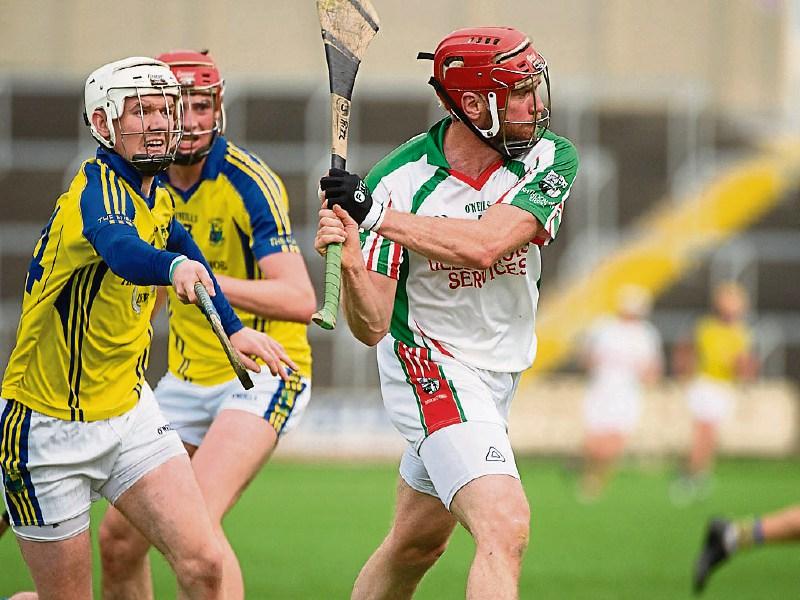 Rathdowney-Errill kept up their quest for a sixth senior title in ten years win a win over Abbeyleix on Sunday but they were made to fight all the way in what was by far and away the game of the weekend and of the championship so far.

It was a hugely entertaining, high intensity shoot-out for 40 minutes with the sides locked at 2-12 apiece entering the final 20 minutes. But when it mattered, Rathdowney-Errill had that little bit more in the locker with a goal from John Purcell giving them much needed breathing space.

They shored up the middle where Jack Kelly, Eric Killeen and Patrick Purcell took over, cutting the supply line to the Abbeyleix forwards. Abbeyleix managed just three points in the closing 15 minutes with two of those coming in injury-time. Jack Kelly chipped in with two important points for Rathdowney-Errill while Patrick Purcell was the driving force behind numerous attacks.

For Abbeyleix, the cost of defeat is a place in the relegation play-off which is very harsh on a side that looked like the third best in the championship based on the weekend's performances. However back to back defeats have ended their hopes while Rathdowney-Errill are back in contention with the quarter-final draw to come later this week once the two replays are completed and they will most certainly be a force to be reckoned with in the weeks ahead.

The game started at a frantic pace and it didn't relent until John Lalor blew the whistle for half-time.

Rathdowney-Errill had three points on the board inside three minutes but Abbeyleix responded with a brilliantly finished goal by Eoghan Fennelly as he deftly and calmly lobbed the ball over the advancing Noel Breenan. Conor Bergin pointed to put Abbeyleix in front but Ross King responded with his third and fourth points to put Rathdowney-Errill back in front after 12 minutes.

Abbeyleix hit back with three in a row and narrowly missed a second goal when a shot from Joe Bergin from a narrow angle flashed across goal and went just wide.

Spurred on by their let off, Rathdowney-Errill jumped back in front with an excellent point from Jack Kelly followed immediately by a goal from Tadgh Dowling who batted a high, bouncing ball to the back of the net. They added four of the next six points to move four ahead, including a long range effort from James Corrigan before a hopeful effort from all of 60 metres from Shane Dollard found its way to the back of the net with Ross King distracting Enda Rowland as the ball travelled through.

Again Abbeyleix were quick to respond and Eoin Reilly got behind the defence and he put the ball past Noel Brennan to the net. Dayne Peacock added a point from his own '65 to leave just two points in it at the break, Rathdowney-Errill 2-9 Abbeyleix 2-7.

After a well deserved break, both sides came out swinging and they stood toe to toe, trading blows for ten furious minutes. Eoin Reilly reduced the gap to one but Jack Kelly and Paddy Purcell were on the mark for Rathdowney-Errill. In a flurry of action, Abbeyleix hit three points in three minutes, two from Eoin Reilly frees and one from Eugene Hearns, to level matters after 35 minutes.

Eoin Bourke and Dayne Peacock traded points before another long range effort from Jack Kelly edged Rathdowney-Errill back in front. Eoin Bourke doubled the advantage. Eoin Reilly pulled one back but the next five minutes were the difference as Rathdowney-Errill scored 1-3 without reply with John Purcell calmly finishing the goal under Enda Rowland after sub Liam O'Connell flicked a long ball into his path.

Abbeyleix continued to press to try and claw back the now seven point deficit and while they scored three of the last five points, the gap was too large to bridge as Rathdowney-Errill saw out the game