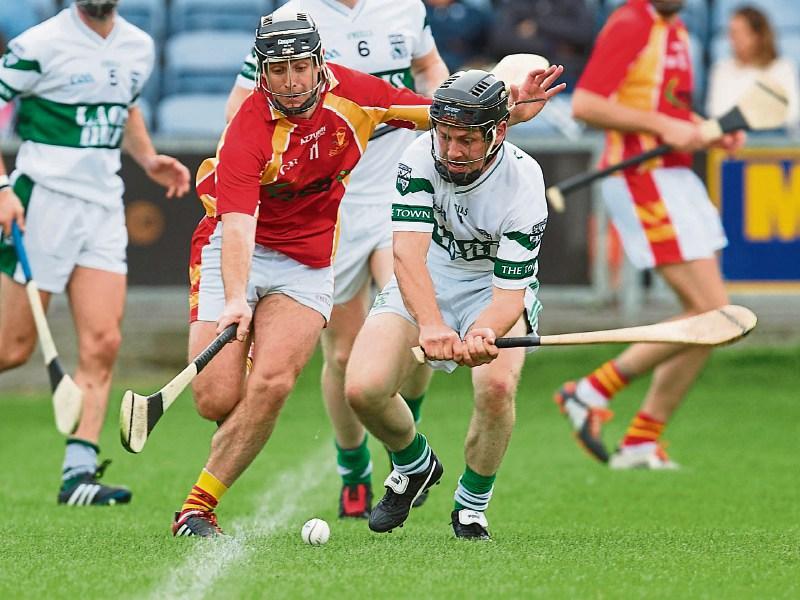 Portlaoise and The Harps will have to do it all over again this week after a titanic struggle on Saturday evening between two sides determined not to exit this year's championship just yet.

With so much on the line, it was fitting that the last five minutes were filled with drama as the battle went right to the very end.

The scores were level five times in the second-half with The Harps getting in front for the first time in the game with three minutes to go. Playing into the teeth of the wind, Portlaoise drew level and they had two chances to win it in the final seconds.

Firstly a shot from Aaron Bergin hit high up on the post. Newly introduced Cahir Healy won the rebound but he slipped and was closed down quickly by the defence, including goalkeeper Peter Walsh. He managed to put a hand pass across the goal to the completely unmarked Sean Culleton who had ample time and an open goal. Culleton however chose to strike the ball first time as it dropped to him and while he caught it sweetly, it went flying inches wide of the unprotected net.

The final whistle went soon after with Portlaoise heads in their hands and The Harps breathing a huge sigh of relief.

This game ended up being a shoot-out between Aaron Bergin (1-10) and Michael Lannigan (0-13) who were both in fine form, holding their nerve when the pressure was on late in the game. Between them they scored ten of the last 12 points of the game.

With the advantage of the stiff breeze blowing towards the town end, Portlaoise blasted out of the blocks and had 1-2 on the board before The Harps knew what had hit them. Aaron Bergin opened the scoring with a free before roofing an unstoppable penalty past Peter Walsh after Colm Gleeson had been taken down in full flight.

Cian Taylor also hit the mark before Michael Lannigan pulled one back for The Harps after eight minutes but Portlaoise were flying and Tommy Fitzgerald and Daniel Delaney both found the target to leave them 1-4 to 0-1 ahead after just ten minutes. They were also inches away from a second goal when a rasping drive on the angle from Aaron Bergin clattered away off the post.

Michael Lannigan pulled one back with a free before Conor Brophy put John Brophy through and the centre-forward smashed the ball to the back of the net. That score got The Harps going and Lannigan added another to get his side back within one.

After that there was nothing to chose between the sides for the remainder as the half as the sides added four points apiece with Michael Lannigan putting over an almost indescribable point into the wind. As it left the hurl, The Harps supporters groaned as it looked as if it was going to miss the target by a good ten metres. Probably to the surprise of Lanningan as much as anyone, it somehow hooked dramatically in flight taking an almost 90 degree turn, and ended up going straight over the black spot.

Portlaoise led by 1-8 to 1-7 at the break but The Harps would have been the happier side as they had the wind significant advantage to come in the second-half.

However it was Portlaoise who were sharper on the resumption scoring four of the first six points, three from Aaron Bergin and one from Dean Lynch, to extend their lead to three. Shane Phelan and John Brophy were on target for The Harps who then enjoyed an important spell scoring three points in three minutes to draw level entering the final quarter with Michael Lannigan hitting two and Conor Dunne the other.

Portlaoise then had two goal chances that they failed to convert but an Aaron Bergin free edged them back in front. Michael Lannigan equalised and those players continued to exchange points up to the 55th minute when the sides were locked at 1-16 apiece. Two of Lannigan's points were excellent efforts from under the shadow of the stand.

Having never led in the game, The Harps eventually got in front for the first time with three minute to go when Richie Saunders won a puck out and slotted the ball over.

Portlaoise responded with yet another Aaron Bergin free before they missed the two late chances to snatch the win with Bergin's shot hitting the post and Culleton missing the open goal.