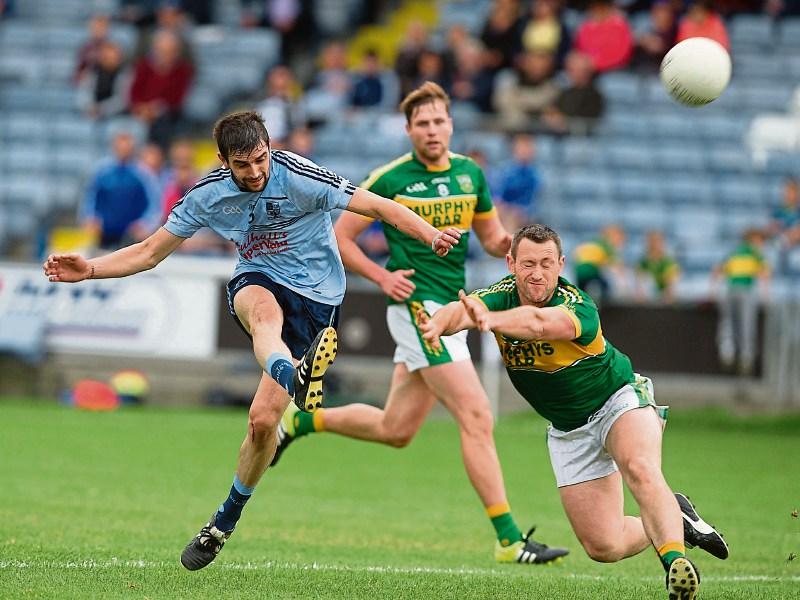 A spirited performance from Ballyroan Abbey when down to fourteen men in the second half saw them win by the tightest of margins and advance to the quarter finals at the expense of Ballylinan.

For their part, Ballylinan must be wondering how they let this game slip as they enjoyed greater possession but were far less economical in the scoring department than Ballyroan Abbey.

It looked good for Ballylinan early on as Gary Walsh converted a 45 with just a minute played and then with just over five minutes gone he added his first from play after Robbie Donoher released him for a shot on the run.

Ballyroan Abbey opened their own account after that when Jamie Whelan scored from what was really their first attack of significance. They came to life after that and a great effort from Philip Shortall from out on the right drew the sides level with eight minutes gone before Scott Conroy put Ballyroan Abbey in front for the first time with nine minutes gone.

The sides continued to swap points as Gary Walsh converted a free just after ten minutes played before Padraig McMahon surged down the field to put his side back in front seconds later.

One of the scores of the game followed shortly afterwards as MJ Tierney jinked through several challenges before kicking over a point. Ballylinan could count on the accuracy of Gary Walsh to punish any frees and, as the game edged into the second quarter, the sides were tied at 0-5 apiece.

After both sides added a further point each through John Kealy and Padraig McMahon, Ballylinan finished the half strongly to outscore their opponents by four points to one.

Robbie Donoher led the way with a great long-range effort from the right wing before James Farrell added another well-taken score with just over five minutes left in the half.

This was quickly added to with a free from Gary Walsh before Eoin Kearns added Ballyroan Abbey’s seventh point from a free with just over 27 minutes gone. Gary Walsh closed out the scoring in the half when he turned his man and shot over from 45 metres to leave Ballylinan 0-10 to 0-7 in front.

A free apiece from Eoin Kearns and Gary Walsh followed early in the second half before Ballyroan Abbey’s hopes appeared to be severely dented when Scott Conroy was sent off for a second yellow for a high challenge with just over 35 minutes played.

However, it was Ballyroan Abbey who responded to the set-back and MJ Tierney converted a free which he had earned with 39 minutes played. It could have been even better for Ballyroan Abbey after that as Eoin Kearns found MJ Tierney with a pass but Aidan Walsh produced a great save.

Having gone over ten minutes without scoring, Podge Walsh then sent over a great score for Ballylinan despite being surrounded with 43 minutes played to leave Ballylinan 0-12 to 0-9 in front.

Frees for either side from Walsh and Tierney kept the three point margin intact as the game edged towards the final ten minutes.

A free from Eoghan Whelan cut the lead to two briefly before a free from Jamie Farrell added another for Ballylinan with nine left.

A pointed free from Eoghan Whelan on 52 minutes followed by a converted 45 from MJ Tierney put the bare minimum between the sides with five minutes to go.

It could have been even better for Ballyroan Abbey when Eoghan Whelan broke through and blasted a shot over the bar, to level the score, when a goal was a strong possibility with three and a half minutes left.

Padraig McMahon then hit an inspirational point to edge his side in front seconds later. And from an unlikely position, Ballyroan Abbey doubled their lead when Jamie Whelan finished off a good move with a point with just under two minutes to play.

Ballylinan’s only response was a point from Ciaran Farrell a minute into injury time as Ballyroan Abbey held on for a memorable victory.