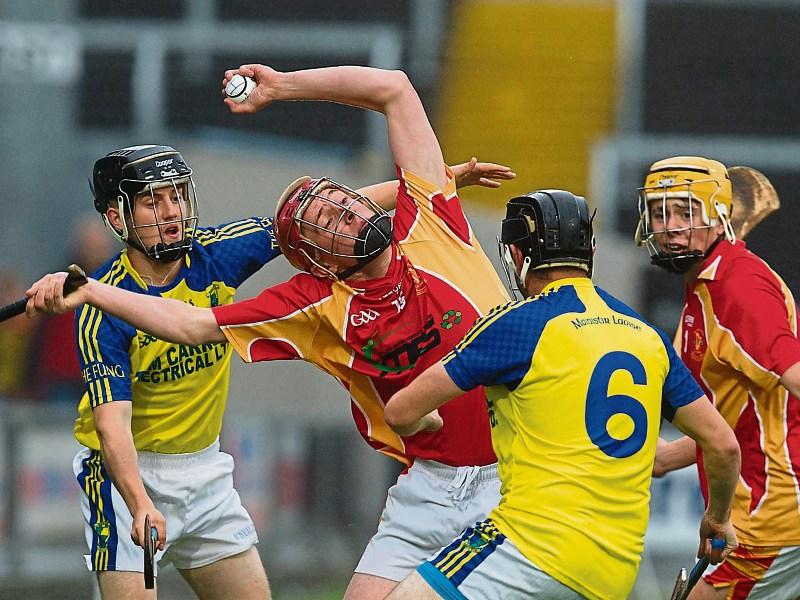 Abbeyleix maintained their senior status with a win on Sunday evening but not before they were given an almighty fright by The Harps who came with a sprint in the final furlong but just couldn't get their noses in front.

Abbeyleix were strong favourites coming into the game and seemed set to canter to the finish with a six point lead with three minutes to go but The Harps, who had managed just one point since half-time, scored 1-2 in a frantic finish but it wasn't enough to rescue a result.

The Harps hurled with an edge from the start and they rattled Abbeyleix in the opening quarter building a 0-6 to 0-2 lead despite playing into the wind.

Eoghan Fennelly and Dayne Peacock hit two early points for Abbeyleix but The Harps hit six, one from John Brophy and five from Michael Lannigan including two super long range efforts from under the stand.

Two long range frees from goalkeeper Enda Rowland, one from inside his own '45 reduced the gap but another Lannigan free put The Harps three ahead after 22 minutes.

The turning point came a minute later when Abbeyleix struck for a goal. Initially the ball was expertly flicked off the hurl of Eugene Hearns but it broke for Dayne Peacock who rifled it home.

Two more points from Enda Rowland followed to put Abbeyleix two up but Lannigan pulled it back to one before the end of a chippy first-half where no quarter was being asked, and certainly none was given.

The light rain of the first-half was replaced by a much heavier version at the start of the second and it was Abbeyleix who pushed on hitting four points, two from Eoin Reilly and one apiece from Enda Rowland and Dayne Peacock to extend the lead. However while they were dominant, they also hit seven wides in this period which meant The Harps were not out of the game.

The Harps eventually ended an 18 minute wait for a score in the half when Gavin Dunne pointed but Eoin Reilly and Ross Reilly pointed to leave Abbeyleix six ahead with three minutes to go.

That should have been that but The Harps were not finished and a point from Kieran Freeman was followed by a goal from Eoin Clancy and it was game on.

Two minutes into the four signalled of injury-time, Michael Lannigan reduced the gap to one but The Harps were not to get another opportunity as Abbeyleix just held on.