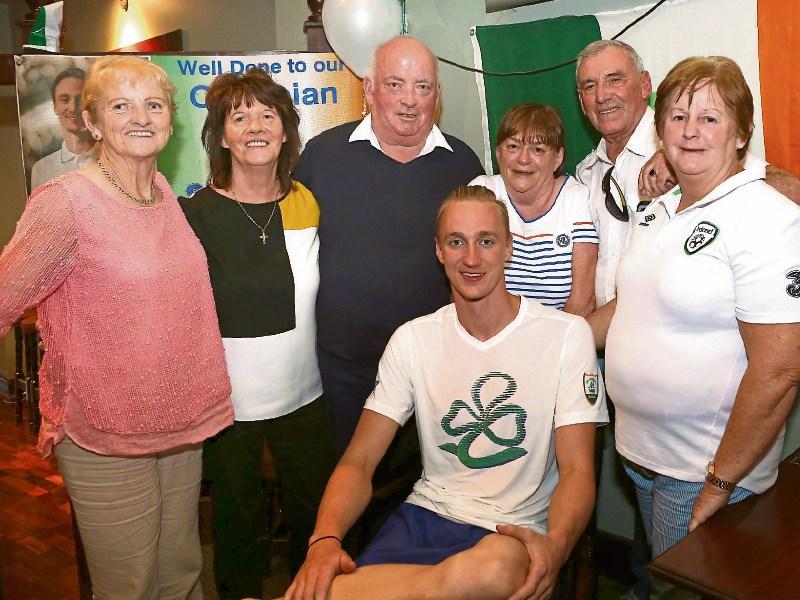 Family and friends gave a great Portarlington welcome to Shane Ryan last week on his return from the Rio Olympics where he represented, Port, Laois and Ireland with distinction in the swimming pool.

Shane, American born but son of Tom Ryan a Port native, has big family connections with Port and many of his uncles, aunts, cousins and family friends turned out at the Pint O'Port last week to celebrate his achievments at a surprise party which was preceded by a homecoming parade around Port.

“He was atired but he says it was an amazing experience. He had a great time. He was delighted with his performance. He broke two of his personal bests and set two national records.” said Dominica.

Shane was supported in Rio by his father, mother Marybeth, brother Brendan and sister Tara. Dominica said there was also plenty of support in Port during the games.

“People were so proud and said he did a great job for Ireland,” he said.

In the run up to the games Shane lived between Dublin and Port and he his likely to be back in Laois.

Shane returned to the USA last week where he is a student of Penn State University. Dominica believes Shane's aim will now be the next Olympics in Tokyo.

“He'll be there and I'm quite sure he'll be stronger and better again. He'll really have greater expections being older and more experienced. I've no doubt he'll do us proud again,”she said.