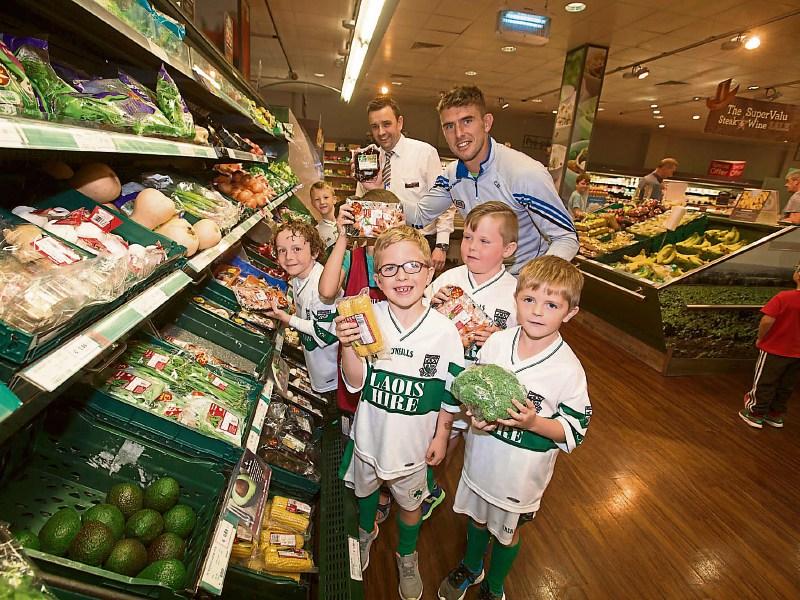 Colm Begley, has teamed up with SuperValu to present Portlaoise with their 2016 ‘Kit for Kids’ packages.

The Laois star will appear in Parkside SuperValu Portlaoise on Thursday 11th August to present young players from Portlaoise GAA with juvenile O’Neills kit including playing gear and training equipment as part of SuperValu’s long standing support as sponsor of the All-Ireland GAA Football Championship.

Giving back to inspire the next generation of GAA stars is a responsibility of which all inter-county players are aware. Begley is no different and is very conscious of just how valuable training gear and equipment is to GAA clubs and in particular, to the development of the GAA’s young players.

Commenting on the “Kit for Kids” initiative Begley said, “I remember as a young player the excitement of new training gear and equipment. I have no doubt the young players at Portlaoise will be delighted to get their hands on such great O’Neill’s kit. I am really looking forward to meeting some of the young players from these local clubs and hopefully encouraging them to continue their involvement with GAA which, has and continues to have such a positive impact on my life.”

In addition to presenting the kit, Begley will also host a nutritional talk and distribute a nutritional booklet which has been specifically designed for SuperValu by Dublin GAA Senior Football and Leinster Rugby Performance Nutritionist Daniel Davey. Healthy and nutritious food is a key element not just of inter-county players training and preparation but all GAA players. A former Inter-County player for Sligo, Davey has filled the booklet with easy to follow dietary information, training tips and recipe inspirations suitable for families and players at all levels of the game.

Begley, said: “Good nutrition forms a key part of my preparation with Laois just as it should be for anyone involved in sport no matter their age or level. Eating well is really just about eating freshly prepared healthy foods. Daniel’s booklet details how easy this can be and I hope I can bring this to life for people based on my own experiences when I meet them in Parkside Supervalu Portlaoise.”

Begley is one of a number of Inter county players who will visit local SuperValu stores throughout the summer as part of the ‘Kit for Kids’ initiative. SuperValu’s continued support of GAA has seen kits worth €360,000 donated to over 400 clubs around the country this summer.