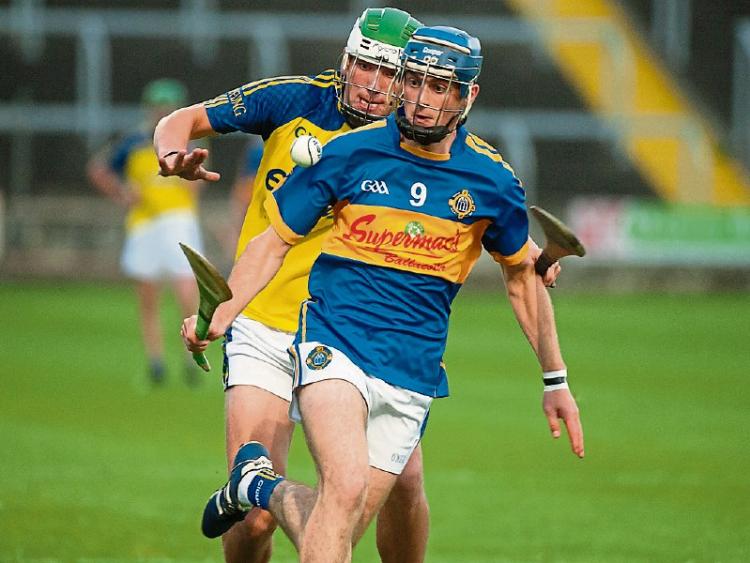 Abbeyleix Gaels claimed the MHC 'A' title last Friday night for the first time in 41 years, after a seven point in over Clough-Ballacolla in O'Moore Park.

While replays often fail to live up to the hype of the drawn game, this certainly bucked that trend, with both teams serving up a throughly absorbing affair at headquarters.

Both teams set their stalls out early, and after 60 minutes of top class hurling it was Abbeyleix Gaels who managed to gain the upper hand.

They had gotten off to a perfect start, as they struck for the first goal of the game in the fourth minute. Ciaran Byrne was the provider as he fired the ball across goal from the wing, and Jim Leech was on hand to direct it to the net.

Clough-Ballacolla needed to settle themselves into the game, and Jordan Walshe settled any nerves with a free. Abbeyleix were continuing to force the issue though, and Ciaran Byrne pointed before he turned provider once again, as he set up Calum Mullins for another score.

Clough-Ballacolla needed to break the Abbeyleix momentum, and they thought they might have done that when Brian Corby and Walshe (free) pointed in quick succession, but another point from Ciaran Byrne had Abbeyleix well on top.

Abbeyleix seemed intent on ending the game as a contest as quickly as possible, and Diarmuid Whelan got his first score of the game before Mullins added another, and Abbeyleix were cruising. They could have wrapped things up soon after when Donagh Egan was sent clear on goal, but Cathal Dunne produced a stunning save to deny him, and Clough-Ballacolla could breathe a sigh of relief.

That relief turned to hope soon after, as they came roaring back into the game. Brian Corby added another point before he pounced on a lapse in concentration in the Abbeyleix defence to hammer in a shot from distance, and it was a case of 'game on'.

Clough-Ballacolla now had the gap down to just three points, but Abbeyleix had put in too much hard work to throw away their lead now. Calum Mullins, who top-scored on the night with 0-10, hit three points before Diarmuid Whelan got his second, and that allowed Abbeyleix to head to the dressing room with a healthy 1-11 to 1-4 lead.

Clough-Ballacolla needed to come out all guns blazing on the restart, but it was Abbeyleix who were quickest to the draw, as the impressive Ciaran Byrne got his third point, and Calum Mullins added another, with the gap now out to nine points and all hope looking lost for Ballacolla.

They refused to accept defeat, however, and Brian Corby pointed once again before Jordan Walshe hit the target to put a halt to the Abbeyleix run of scores. Calum Mullins replied, but Clough-Ballacolla were slowly building a head of steam, and they rattled off four points without reply to give themselves a glimmer of hope, with Jordan Walshe and Brian Corby among the scorers.

Just as they had done when Ballacolla got their goal in the first half, Abbeyleix responded superbly, as Calum Mullins hit two frees to steady the ship, and another Diarmuid Whelan point before the end was the clincher, as The Fung claimed a well-deserved victory.