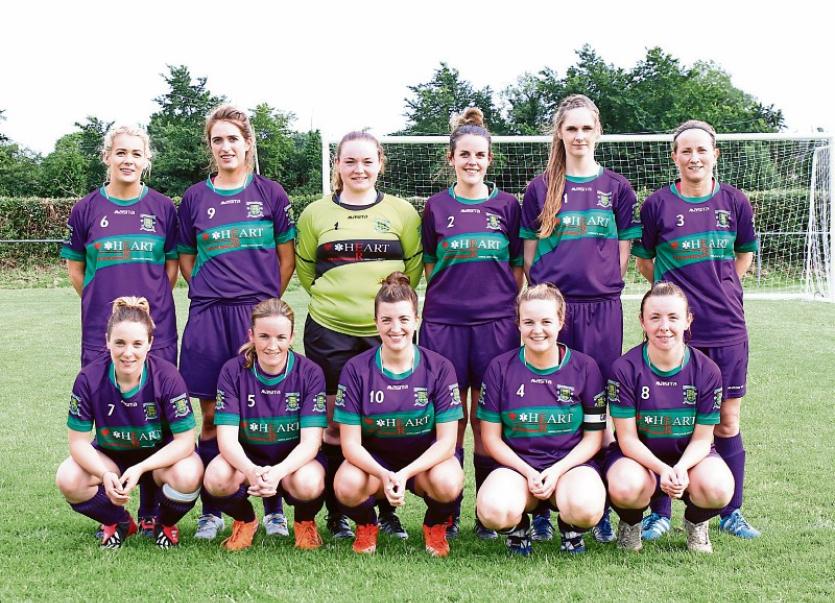 Portlaoise Ladies AFC secured their spot in the KDFL Joe Rooney Cup Semi-Final for the first time ever with a 5-2 win away over Sallins Celtic on Monday last.

It is the first time that the ladies have reached this stage of the cup competition, having been previously knocked out at the quarter final stage in the last two seasons.

A tricky away tie saw Portlaoise come out the brighter side in the opening few minutes, winning possession all across the field. The midfield duo of Ellen Healy and Jenny Conroy were playing some fantastic football.

Indeed, it was Conroy who won the ball in midfield and picked a lovely pass up to Mo Nerney out on the left who took on the Sallins defence with some lovely footwork before crossing into the box where Catherine Mansfield got her foot on the end of it, making it 1-0 early on in the game.

From the tip off Portlaoise played some lovely soccer, spreading the ball down both wings, opening up Sallins and it wasn’t long before Portlaoise made it 2-0. Aisling Kehoe ran out of defence, powering up the field before laying a well-timed pass to Aisling Behan just on the edge of the box, who was brought down just as she was about to shoot at goal which saw Portlaoise awarded a penalty. Mo Nerney stepped up to bang home in the bottom left corner making it 2-0 to the away side.

It was all going well for Portlaoise who were out to prove a point in this competition. Just before the half-time break, Portlaoise made it 3-0 through some excellent work by Nicole Kelly. The left back ran out of the defence and down the left flank, using her speed, Kelly whipped a ball across the box finding Mo Nerney who took one touch before finishing from close range on the brink of half-time, Portlaoise were cruising at this stage.

The second half saw a lot more from the Sallins side as they began to find their feet in the game. In fact, on the 50th minute, they found the net through a brilliant individual goal from Stacey Harris, who picked up Division 2 player of the year last season and scored a whopping 35 goals in all competitions.

The Portlaoise back four of Nicole Kelly, Bernie Bowe, Aisling Kehoe and Maria Keane were managing to keep Harris quiet for big parts of the game but on this occasion, she managed to get through the defence, with some excellent footwork she passed two Portlaoise defenders before rounding the keeper and hitting the net, making it 3-1, game on.

This didn’t seem to faze Portlaoise as they remained calm under a slight bit of pressure from the home side. It was Harris again causing problems, going on a run at the defence, but to their credit they stood firm and won most of the battles.

Pushing for their second goal, Sallins left themselves short at the back and a quick ball out of the defence by Maria Keane up to Mo Nerney, saw her left one on one with the Sallins centre back, giving her no chance, Nerney’s pace took her easily past her and she made no mistake in front of goal with a beautiful finish past the Sallins keeper, making it 4-1 on the 75th minute.

A fine display from a very fit and well organised Portlaoise side, they produced probably their best performance of the season this year to date and it continued when Ellen Healy was given the ball on the edge of the box, Healy having a go from distance was unlucky to see her shot go just over the bar again.

Piling the pressure on the Sallins defence, it was Colleen Rickard’s turn to have a go. The Young Player of the Year from two years ago, found herself in a dream position following some poor defending from the home side, Rickard made no mistake when the chance came begging, she rattled the net giving the keeper no chance, making it 5-1.

Credit has to go to the Sallins side, they never gave up at any time during the game and on the 85th minute through some great work from the two midfield players, they worked well together to get through the Portlaoise defence, finding again Harris who was lurking in the box, a great player, she put it away from close range making it 5-2 and that was how it finished.

A super performance from the away side Portlaoise, that sees them progress to the cup semi-final against previous holders Kilcullen AFC at home which will prove a tough task for the ladies but no doubt they will give it their all. Time and date to be confirmed. Good luck to the ladies in their semi-final.