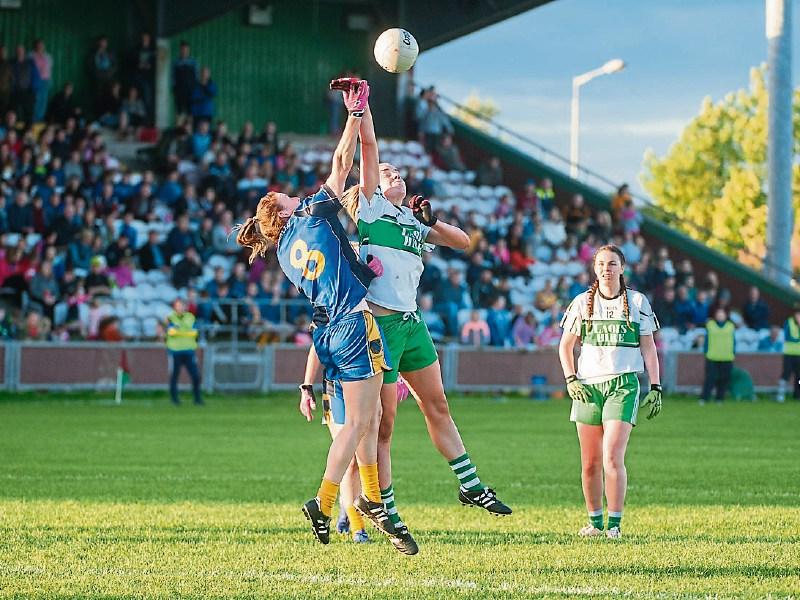 Sarsfields used all their experience and match winning know-how to secure their fourth senior title in-a-row and dash Portlaoise’s hopes of a first ever title.

Certainly the Portlaoise side took the fight to Sarsfields for long periods of the game, but it was the ability to take scores at crucial stages which ensured that the county champions returned home with the silverware again.

In the end it was a more clinical approach in front of goals which sealed this win for Sarsfields. In the first half, Portlaoise took the game to the holders and had edged in front 0-6 to 0-3 as the half neared conclusion. Then Sarsfields capitalised on a defensive error and Tracey Lawlor finished to the net to draw the sides level right on the stroke of half time.

A second goal early in the second half by the influential substitute Ciara Burke put their side three points clear and they were able to build on this platform. The nature of the game then suited the champions as they were able to break downfield and pick off scores as Portlaoise were forced to take the game to them.

Aisling Kehoe was at the heart of everything good they did and she sent over a great long-range point with three minutes played, and a free shortly after.

Portlaoise had a let off when they lost possession but did well to recover and stop Ciara O’Loughlin from scoring a goal when Ciamh Dollard was off her line with ten minutes gone.

They recovered from that to edge further in front when Grainne Moran shot over a point from free.

But Sarsfields responded with two points in four minutes, with Tracey Lawlor converting a free she earned before sending over another point to draw the sides level.

Portlaoise came back within seconds when Aisling Kehoe sent over a great free from the wing ten minutes before the break. The Town were looking on the up at this stage and stretched their lead to three in the following minutes. Fiona Dooley added their fifth point after Sarah Anne Fitzgerald had set her up and with five minutes to go Aisling Kehoe sent over an inspirational score.

The introduction of substitute Ciara Burke had an immediate effect and she gathered a poor Portlaoise clearance and fed the strong running Tracey Lawlor who ran in behind the Sarsfields defence, to side-step Ciamh Dollard and finish to the net for what really was a sucker punch for Portlaoise in the final minute of the half.

The sides traded points early in the second half when Meaghan Dunne turned well to shoot over well seconds into the second half before Grainne Moran converted a free seconds later.

The all important second goal arrived when Sarsfields won possession in their own half and broke down the field. This time Tracey Lawlor gave the final pass to Ciara Burke who shot across goal to the right bottom corner for a great finish four minutes into the second half.

Portlaoise didn’t buckle though and after Grainne Moran (free) and Tracey Lawlor swapped scores, points from Moran and Aisling Keogh (free) left a point between the sides as the game edged toward the final quarter.

The sides traded further points after that through Olwyn Farrell and Aisling Keogh as the result still hung very much in the balance.

But the final fifteen minutes proved decisive for Sarsfields as they hit five points on the trot, perhaps explained somewhat by Portlaoise tiring from doing much of the running in the game. Portlaoise also had Ciamh Dollard to thank for a brilliant save from Meaghan Dunne when she dived full stretch to deny her with nine minutes remaining.

Sarsfields were not deterred though and Dunne stretched their lead to two points with seven minutes to play. Minutes later Tracey Lawlor added a free as Sarsfields gathered momentum. Their experience came to the fore in those closing minutes and Lawlor added two further points (one free) as the game edged into injury time.

Joyce Dunne put Sarsfields six points in front after that but Portlaoise had the final say through a point Rebecca Kelly in the final seconds.