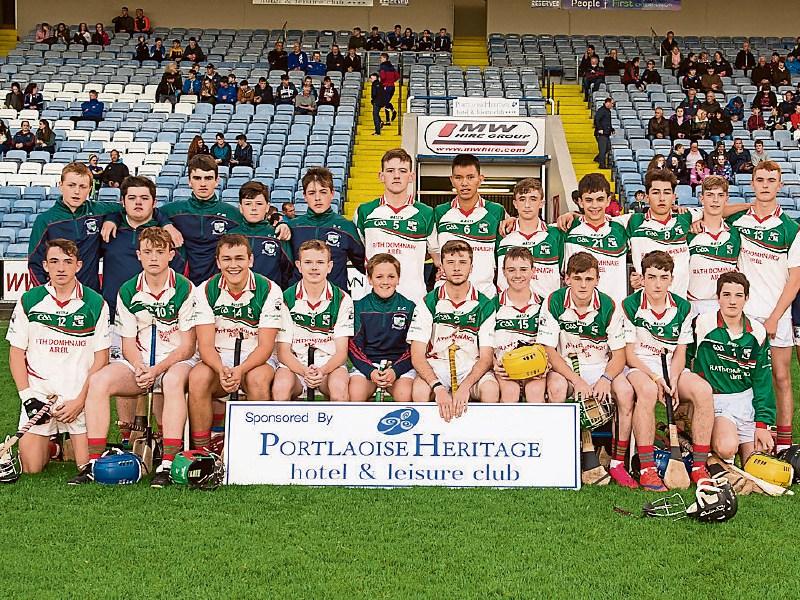 Both sides deserve praise for a fascinating game of hurling last Friday night, however it was Rathdowney-Errill who took the honours thanks to a brilliant second half comeback.

Castletown-Slieve Bloom got off to a better start, with scores coming through an Aaron Gaughan free and two from the Joe Phelan. Sean Browne pulled one back for Rathdowney-Errill.

A moment of madness followed, as Rathdowney-Errill keeper Jayson Alley nearly had a nightmare, fumbling an easy shot, but the post came to his rescue. Castletown-Slieve Bloom looked much the sharper, with two further scores from Ciaran Conroy and Joe Phelan.

A free from Aaron Costigan was matched at the other end by an Aaron Gaughan free. The sides traded scores through Gaughan (free) and Michael Shortt, before Rathdowney-Errill pulled two back. The first goal of the game went to Castletown Slieve Bloom through Joe Phelan, as he skinned his man and fired home.

Rathdowney-Errill got three scores before half-time to reduce the gap to three, and set it up for an excellent second half.

The second half kicked off at a frantic pace, with the sides trading scores for around ten minutes. Rathdowney-Errill scorers were Darren Bowe and Sean Browne, and Castletown Slieve Bloom’s were Joe Phelan and Gaughan.

Jamie Gill put his side four points to the good, before Rathdowney-Errill got that all important goal through Darren Bowe. A finish into the bottom corner of the net meant that this was just a one point game. Rathdowney-Errill now had all the momentum, and they took full advantage of Castletown-Slieve Bloom’s drop in form.

A few minutes later they got their second goal of the game, this time coming through the impressive Aaron Costigan. A cool and composed finish from the corner forward gave his side a two point lead. Further scores near the end came through Costigan (free) and a point from wing back Adam Loughman.

Castletown now needed goals, but time was against them. A point from midfielder Ben Shore was not going to be enough, as Rathdowney-Errill triumphed to become champions.