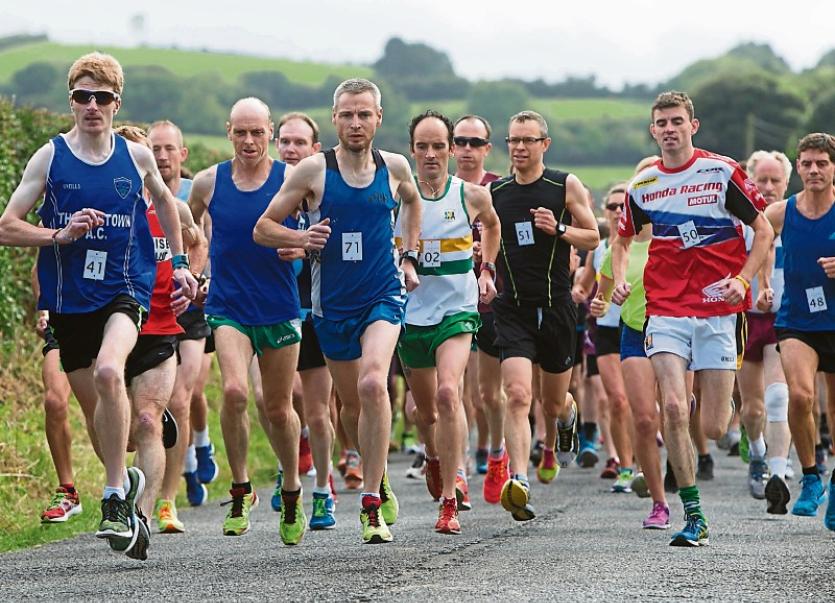 All roads led to Luggacurren on Sunday last with record crowds turning out to take part in the 25th running of the annual 10K. With dry but very blustery conditions it was always going to be tough running over this testing course.

At four kilometres Dave McPhearson made a breakaway and was never to be overtaken, to win his first Luggacurren 10K in a time of 33:20. Stephen Hunter came in at 34:13 to take second place. The group that followed continued to battle hard with the twelve time winner, Colm Burke, edging out Aengus Burke by three seconds for third place with a time of 35:35.

In the ladies section the top three contestants were separated by a mere 30 seconds. The defending champion Colette English (St Abban’s), had a great battle with Jean McEvoy (Ballyroan, Abbeyleix & District) to retain her title in a lead of six seconds with a time of 43:11 followed in third place by Grace Reilly (Portlaoise), with a time of 43:41 who also took first prize in the O40 category.

The team event sponsored by PJ and Martha Dunne, Dunne Transport, Shanrath, was won by the defending champions, St Abban’s men’s team with a total of 22 points. St. Abban’s Ladies also retained their title with a total of 97 points.

To mark 25 years Eileen Dunne, RTE, who herself has roots in Co. Laois, was delighted to attend this event. Piper Fiona Brennan, led the walkers from the hall to the start line in fine step where Eileen officially started the non-competitive walk and completed the course herself. Large numbers turned out for the walk and while it was a challenging course, there was high spirits and a great atmosphere. Dessie Garvan supplied music in the grounds which also added to the occasion.

All who took part were treated to well-deserved refreshments in the hall afterwards. A great day was had by all!

The organisers wish to thank all participants and all who helped and gave of their time to make this event such a success and to our loyal sponsors for their continuous support.